A version of this was published in The Santa Fe New Mexican
December 5, 2014 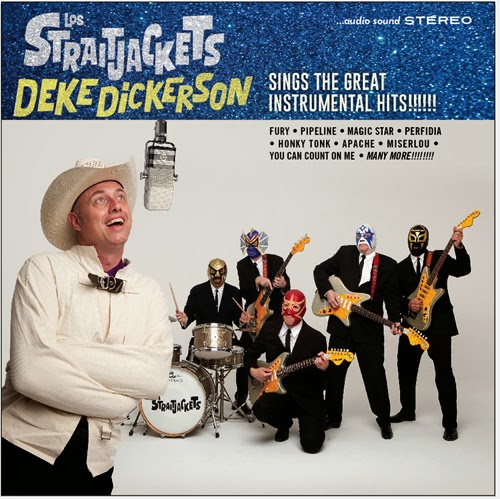 Did you realize that many of the best-known rock ’n’ roll instrumentals of the ’60s, from “Pipeline” to “Telstar” to “Hawaii Five-O,” actually have words? Neither did I — until I heard the new album by Los Straitjackets, Deke Dickerson Sings the Great Instrumental Hits.

And even if there weren’t lyrics when The Ventures, The Shadows, Dick Dale, and the others recorded them, Dickerson and his masked amigos have made them up for the benefit of this fun little album.

Here’s how Dickerson — an ace guitarist himself and former member of The Untamed Youth — explains it in a news release: “In case you’re confused, imagine Bill Murray’s classic lounge singer character on Saturday Night Live belting out drunken made up lyrics to the ‘Star Wars Theme.’ It can be done, it has been done, and these songs truly come alive once you hear them sung … with words!”

Indeed. And the next time you hear the original version of any of these on the radio and feel compelled to sing along, you won’t have to sing “duh-duh-duh-duh dum-dum duh” anymore.

Granted, some of these selections already had lyrics. Back in the ’60s, The Lettermen (an easy-listening hit machine in their day) had a syrupy cover of the theme from A Summer Place. Dickerson and the boys do a pretty good imitation of the trademark Lettermen falsetto here. And while “Perfidia” was recorded by The Shadows, a British group, and The Ventures, the song’s recording history features vocal versions by everyone from Desi Arnaz to Julie London to Ben E. King. With lyrics referring to betrayal by a beautiful woman, the song inspired the title of James Ellroy’s latest crime novel. Los Straitjackets do it as a quasi-ska tune.

Hearing words sung to these songs is truly a gas. Also admirable are the original arrangements on many of them. “Miserlou,” for instance, was originally a Greek song that spread to Turkey and the Arab world. In the ’60s it came to the U.S., thanks to Dick Dale’s classic surf-rock version. (Dale is of Lebanese descent.) Los Straitjackets turn it into an exercise in exotica that might remind Elvis Presley fans of the soundtrack from Harum Scarum. “Apache,” The Shadows’ biggest hit, is done here as a goofy faux-disco-rap number that’ll make you think of Blondie’s “Rapture.”

A couple of songs even get new titles with their new lyrics. “Hawaii Five-O,” The Ventures’ great television theme, becomes “You Can Count on Me,” with appropriately cheesy lyrics: “If you get in trouble, come on home to me/Whether I am near you, or across the sea.”

And The Tornados’ “Telstar” becomes “Magic Star,” with Dickerson singing even cheesier lyrics: “Magic star above, send a message to my love.” This isn’t the first time somebody’s put words to “Telstar,” though. Fans of the late Michael O’Donoghue’s 1979 dark comedy, Mr. Mike’s Mondo Video, should remember it as “The Haunting Theme Song,” the movie’s recurring strain in which Julius La Rosa sings, “that wacky world of Mondo Video.” 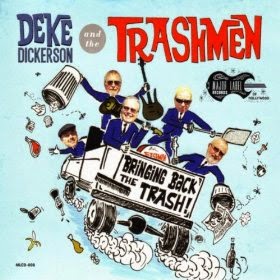 Two of my favorites here are songs that began life as Los Straitjackets originals: the cranked-up opening song, “Fury,” in which Dickerson borrows the pro-wrestler growl of The Novas’ garage-rock classic “The Crusher,” and “Kawanga,” in which Dickerson tips his hat to the vocal stylings of singer/drummer Steve Wahrer, of The Trashmen. The latter shouldn’t be surprising: Dickerson recorded an album, Bringing Back the Trash, with those “Surfin’ Bird” maniacs that was released earlier this year.

For the record, this isn’t the first time Los Straitjackets (probably the finest instrumental-rock guitar group of the past 20 years) have done an album with vocals.

Back in 2001, they hit us with Sing Along With Los Straitjackets, featuring a revolving cast of singers that included the likes of Dave Alvin, Nick Lowe, Raul Malo, and Reverend Horton Heat. The real show-stealer, though, was Mark Lindsay, of Paul Revere & the Raiders, who tore into Roy Head’s “Treat Her Right” with amazing energy. In 2007 came Rock en Espanol Vol. 1, which had Cesar Rosas (Los Lobos), Big Sandy (Big Sandy and His Fly-Rite Boys), and Little Willie G. (Thee Midniters) taking turns singing Spanish versions of songs like “Hang on Sloopy,” “Dizzy, Miss Lizzy,” and — my favorite — Arthur Alexander’s “Anna,” sung by Little Willie.

As much as I admire the crack instrumental prowess of guitar stud Eddie Angel and the other Straitjackets, good vocals do nothing but add to my enjoyment of their sound. 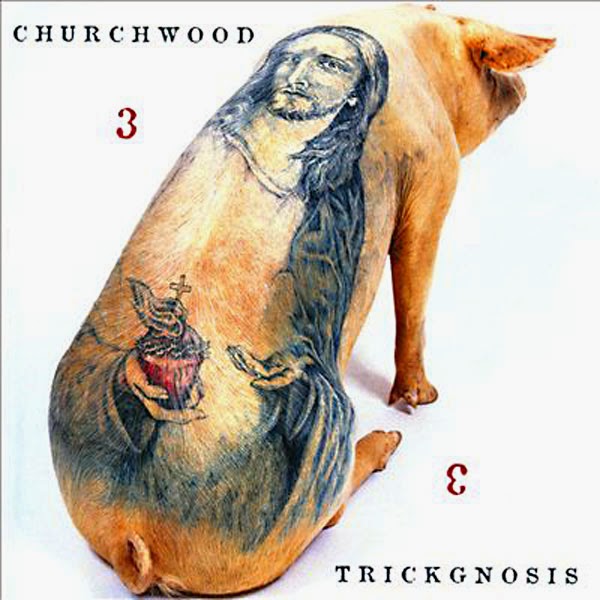 * 3: Trickgnosis by Churchwood. This band is from the Lone Star state and has its roots in blues rock, but this ain’t your average Texas blues band.

As the title suggests, this is the group’s third album. And, like its first two, it’s got cryptic but alluring lyrics — singer Joe Doerr, who wrote many of the words, is an English professor by day — with references to Gnosticism, voodoo, God, and Satan. Some kind of cosmic struggle seems to be playing out from song to song, though there’s no easy story line to grasp.

And, as Churchwood fans have come to expect, these weird tales are sung over musical backdrops with changing time signatures and unpredictable twists and turns, with nods to Captain Beefheart, Frank Zappa, Pere Ubu (I hear this influence especially in the song “I Spit You Out”), and maybe even Mr. Bungle.

Churchwood’s two guitarists, Bill Anderson and Billysteve Korpi, lead each other down strange corridors — and yet the band maintains an undeniably rootsy quality.

There are several standout songs on Trickgnosis. The aforementioned “I Spit You Out” features Doerr singing like some high priest at the Temple of Doom sentencing a hapless sinner over Black Sabbath guitar riffs. “Chemtrailer Trash,” the song with the funniest title, is simple breakneck punk rock.

“Eminence Gris Gris” borrows the main hook of Hendrix’s “Voodoo Chile” as Doerr tells the story of a New Orleans root doctor, while name-checking an actual hoodoo musician who died in 2011: “He got a cane and a turban, a little juju for the enemy/He got a sack full of mojo, a John the Conquer root, a marigold/He got a friend in Coco Robicheaux, the Loup Garou, and the cat bone.”

But my favorite, at least at the time of this writing, is “Hanged Man.” With its funky harmonica and horn section that punctuates the refrain, this upbeat number is the bluesiest track on the album. Doerr happily quotes from a famous scene in Touch of Evil before the story ends with murder and possibly suicide.

Churchwood is a band that never will find a place in the mainstream. But the group definitely deserves wider exposure. Every time I listen to Trickgnosis, I find more surprises that delight and amaze. For more on the band, including a fascinating interview with Doerr and Anderson, visit www.saustex.com/churchwood.html.

And here's a Halloween party out of control with the 'jackets, Deke and The dadgum Fleshtones. (Miriam Linna of Norton Records, A-Bones etccan be seen among the onstage dancers.)

And here's a little Churchwood just to twist your head off: