A version of this was published in The Santa Fe New Mexican
December 19, 2014 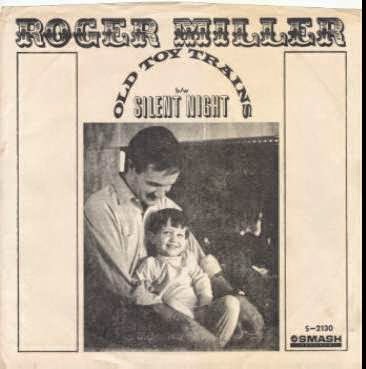 Trucks, trains, prison, Mama. And Christmas. These are some of the things that make a great country song. Indeed, some of my favorite Christmas songs happen to be by country or alternative country (whatever that is) artists. Country singers have loved singing about the holiday season for longer than I’ve been around. Some folks don’t realize that “Rudolph the Red-Nosed Reindeer” started out as a hillbilly tune, written and first performed by a singing cowboy named Gene Autry.

Here is a list of my personal top 10 country Christmas songs, in no particular order. (Warning: As noted above, some are probably considered “alternative.”) Though none are as famous as “Rudolph,” in my book, they deserve to be.

1. “Old Toy Trains” by Roger Miller. The multi- talented musician wrote this back in the late 1960s for his son Dean, a toddler at the time, and it became a holiday hit. When it first came out, I was too old to believe in Santa Claus. But it made me wish I wasn’t. While Miller is known for his clever, hillbilly hepcat lyrics, “Old Toy Trains” was a rare public glimpse into his sweet side.

2. “Lonely Christmas Call” by George Jones. There is something about Christmas that makes happiness happier and misery more miserable. George Jones, who had perhaps the most soulful voice in country, nailed the misery in this holiday heartacher. It’s about a guy whose wife abandoned him and their children on (you guessed it) Christmas Day. “The kids are lonely here without you/Even wrote ol’ Santa about you,” Jones laments. “If you could see their little faces/As round the tree they take their places.”


3. “Santa Looked a Lot Like Daddy” by Buck Owens. This one’s not that deep. Just good holiday fun. Buck and the Buckaroos were at the peak of their power about this time, and this new take on “I Saw Mommy Kissing Santa Claus” made the season even jollier. Here's a version with Susan Raye.

4. “Santa Can’t Stay” by Dwight Yoakam. A darker version of “Santa Looked a Lot Like Daddy”: On one level, it’s hilarious. A drunken father dons a Santa suit and barges in on Mama and her new beau, Ray, as the shocked and mystified children look on. But any divorced guy who can remember his first Christmas after the split-up can’t help but feel pangs of horror listening to it. “Mama said Santa can’t stay/Said he might just beat the crap out of Ray.”

5. “If We Make It Through December” by Merle Haggard. Written during a recession in the early ’70s, this song helped cement Merle Haggard’s reputation as a workingman’s troubadour. It’s the story of a guy who got laid off from his factory job right before Christmas. “Now I don’t mean to hate December, it’s meant to be the happy time of year/And my little girl don’t understand why Daddy can’t afford no Christmas here.” His situation, of course, doesn’t get resolved by the end of the song. But there’s hope that the family will be “in a warmer town come summertime.”

6. “Nothing But a Child” by Steve Earle. The late-1980s duet with Maria McKee of Lone Justice starts out by telling the story of the three wise men following the star to the manger in Bethlehem: “They scarce believed their eyes, they’d come so many miles/And the miracle they prized was nothing but a child.” But this isn’t really a song about the baby Jesus. It’s about the miracle of all babies. “Now all around the world, in every Iittle town/Every day is heard a precious little sound/And every mother kind and every father proud/Looks down in awe to find another chance allowed.”

7. “No Vacancy” by Marlee McLeod. One of my favorite tunes by the Alabama-born songwriter (who retired from the music biz way too early) tells the story of someone, a truck driver perhaps, who drives for a living. “Is that the star of Bethlehem?/No, that’s the Holiday Inn/Is that the light from a stable I see?/No, it’s a sign that says `No Vacancy.’ ” The guitar break is based on “Hark! The Herald Angels Sing.”

8. “Six Bullets for Christmas” by Angry Johnny and the Killbillies. Even murderous cretins love Christmas, and from the deepest backwoods of Massachusetts comes Angry Johnny, with this twisted holiday tale. Angry knows all those things that make Christmas the most wonderful time of the year: Santa Claus, drinking, snow, depression, gunplay, jingle bells, and homicide. In other words, all the elements of a good Angry Johnny song — plus all the Christmas trimmings. “Six Bullets” is on Angry Johnny’s 2010 Christmas album, Bang Bang Baby Bang Bang Merry Christmas, which is full of similar Yuletide musical mayhem.

9. “Merry Christmas From the Family” by Robert Earl Keen. This song, from Robert Earl Keen’s 1994 album, Gringo Honeymoon, deals with a lovable, if severely dysfunctional, Texas family that sits down for a hilarious holiday feast. There’s the brother with various kids from various marriages and a new wife who’s a 12-step zealot; the sister who brings a new boyfriend, whose ethnicity provokes suspicion (until he sings “Feliz Navidad,” which apparently redeems him in the eyes of the family); and Fred and Rita from Harlingen (“I don’t remember how I’m kin to them”). Keen actually wrote a sequel to this called “Happy Holidays, Ya’ll.” He shouldn’t have. The original never will be matched.

10. “Blue Christmas Lights” by Chris Hillman & Herb Pedersen. Buck Owens co-wrote this sad Yuletide honky-tonk weeper with Red Simpson back in the 1960s. But I actually like this version, from the mid-1990s, better. Chris Hillman, a former Byrd and Flying Burrito Brother, and Herb Pedersen make it haunting with their harmonies. As far as I can determine, this song was solely released by Sugar Hill Records, on a mostly unremarkable Christmas compilation called Tinsel Tunes. (The only other track worth noting is a live version of Robert Earl Keen’s “Merry Christmas From the Family.”)


Enchiladas roasting on an open fire: More music to ruin any Christmas party! Hear my podcast special at www.bigenchiladapodcast.com.
at December 18, 2014