THROWBACK THURSDAY: Getting Ready For Christmas with Rev. J.M. Gates 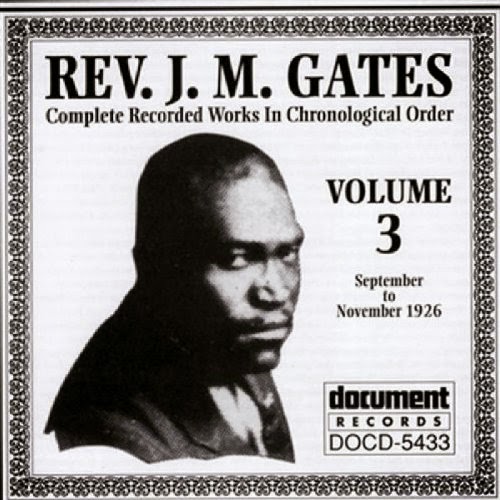 For today's Throwback Thursday, let's enjoy a little Christmas cheer with the Rev. J.M. Gates, a preacher from Atlanta. Mount Calvary Baptist Church in Rock Dale Park was his church.

As is typical with many old time African American preachers of his time, Gates' sermons usually start out as spoken, but gradually shift to singing. With call-and-response action from members of his congregation, Gates' best tracks are musical as well as rhythmic.

According to Bil Carpenter in his book Uncloudy Days: The Gospel Music Encyclopedia , Gates was responsible for introducing the gospel music of Thomas Dorsey to the black church market. Gates' first record was his biggest hit. That was one called "Death's Black Train." Carpenter said it sold more than 35,000 copies.

Gates' Christmas records are just as light-hearted and cheerful in tone. "We celebrate Christmas wrong, by the way I look at this matter," he declared in one of these records. Indeed, Gateswas a true hell-fire evangelist. His passion was unrestrained. He really did not want you to go to Hell.

For the first jolly bit of Christmas spirit, here's a message titled "Death May Be Your Santa Claus."

Here's one for "you midnight walkers," "you liquor drinkers," "you bootleggers" and "you slick-fingered gamblers" called "Did You Spend Christmas Day in Jail"

And this one is simply titled "Getting Ready For Christmas Day." Are you getting ready? Well, according to Rev. Gates, the undertaker, the jailer and the police force are getting ready for YOU!

Apparently Paul Simon is a fan of Rev. Gates and the above song. He sampled it -- and borrowed the title for this 2010 song. Simon talks about the song HERE.