WACKY WEDNESDAY: Are You Ready, Hezzie? 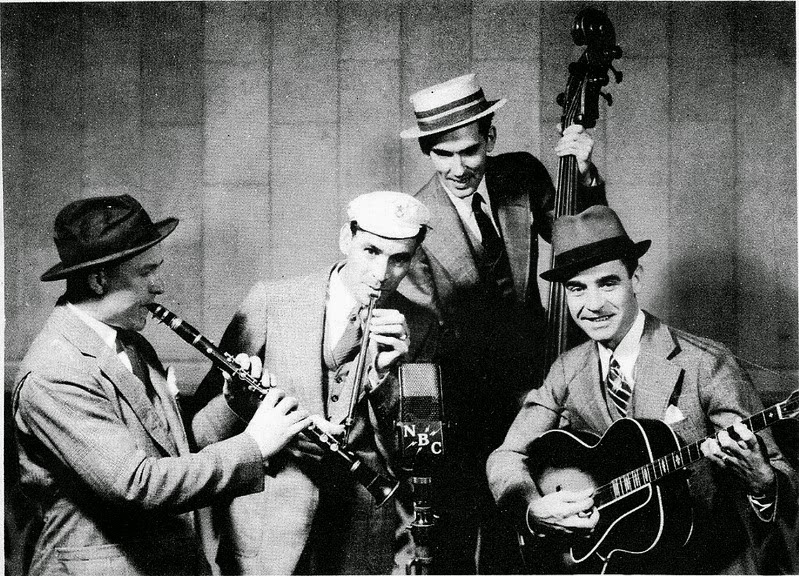 Before there was Spike Jones, and long before there was the Bonzo Dog Band, there was The Hoosier Hot Shots, a band that bridged Vaudeville and Hollywood. A band in which the lead instruments were a clarinet and a slide whistle.

Three of the four Hot Shots played together since the 1920s, playing the Vaudeville circuit as part of Ezra Buzzington's Rube Band. These were clarinet man Gabriel Ward and guitarist Ken Trietsch and his brother Paul "Hezzie" Trietsch, who, with his animated eyebrows, was the real comic of the group. He played the whistle as well as a souped-up washboard and an arsenal of bells. whistles and percussion. Frank Delaney later joined playing stand-up bass.

After the Great Depression killed off Vaudeville, the Hot Shots became national radio stars on the National Barn Dance, on WLS in Chicago and later as regulars on the Uncle Ezra Pinex Cough Syrup show on NBC.

They moved to Hollywood in the late '30s. There, they would appear in 22 films, mostly westerns, and "soundies" such as the above video of From the Indies to the Andes in His Undies.

A personal note about Hezzie Trietsch: When I was a kid and my grandmother was taking me somewhere, she'd often say, "Are you ready, Hezzie?" She'd just laugh when I'd ask who Hezzie was. It wasn't until well into my adulthood, when I discovered The Hoosier Hot Shots that it all became clear to me.

Cub Koda wrote in the All Music Guide:

Although nowhere near as wild as Spike Jones, nor possessing the `thinking man's hillbillies' personas of Homer & Jethro, it is impossible to think of either of those two acts existing -- much less prospering and finding an audience -- without the groundbreaking efforts of the Hoosier Hot Shots.

Here are a couple of more live songs from these Indiana crazies, "Darlin', You Can't Love But One" and a highly Hoosierized "My Bonnie Lies Over the Ocean" :