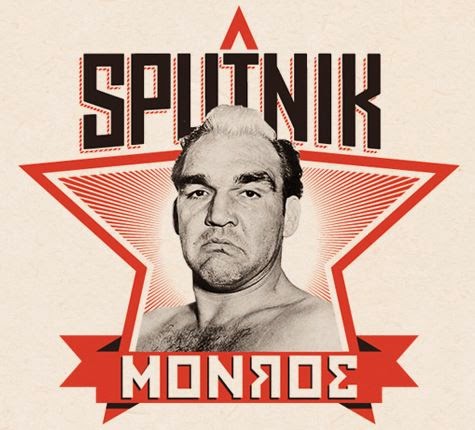 Last week's Wacky Wednesday, where I toasted Rev. Billy C. Wirtz, whose hilarious repertoir incudes several tunes dealing with pro wrestling, got me thinking about other odes to the grunt-and-groan biz.

So this week I present several of my favorites about wrestlers and, in many cases, by wrestlers.

Let's start with one of my favorite rasslers, the late Sputnik Monroe, who I saw wrestle many times at Stockyards Coliseum in Oklahoma City in the early '60s when I was but a lad. Sputnik was the Heavenly Body from Outer Space, The Body Men Fear and Women Love. In 1959  released one of the first, maybe the very first record by a professional wrestler, "Sputnik Hires a Band." WKNO, a Memphis NPR station, did a story on the song a few years ago,

Tampa rocker Ronny Elliot does this heartfelt tribute to one of the titans of the field, Gorgeous George,

Thanks to Dr. Demento, this tune by Fred Blassie probably is the most famous wrestling song of all. Sell it to the circus, what the heck?