Later That Lifetime: An Update for The Roots of Picnic Time for Potatoheads Back in 2011, when Spotify was new to these United States, I embarked upon a little "exercise in self-indulgence" and created a Spotify playlist of songs "that were parodied, stolen, alluded to, mentioned in passing in or somehow have a spiritual connection" with tunes on my 1981 smash hit album Picnic Time For Potatoheads.

Posting about that Spotify list on this very blog, I quipped, "If the album actually ever had been successful, here are some of the lawsuits I would have faced."

I thought about that list and the blog post tonight while reading a rant by my friend John Egenes posted on Facebook concerning a lawsuit over music copyrights.

I recalled my blog post, so I looked it up and re-read the thing. (And I fixed a four-year-old typo I hadn't noticed before.)

The entry about "My True Story" by The Jive Five said: 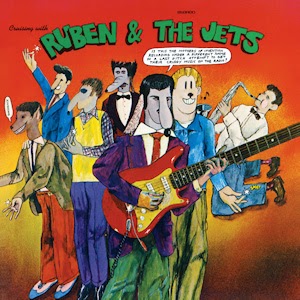 This song itself didn't directly inspire "The Green Weenie," but it's part of the great Doo-Wop Collective Consciousness that did. (I was disappointed that the Frank Zappa catalogue is not on Spotify. My first choice would have been a Ruben & The Jets tune in honor of the late Jimmy Carl Black, who played on "The Green Weenie.")

It occurred to me that in more recent times, I had seen Zappa on Spotify.

So what the hell, I updated it with my favorite Ruben song "Later That Night."

It's the last one on the playlist

I'm keeping the Jive Five tune on there just because it's such a great song.

And here is the song Ruben & The Jets inspired (drums by the late, great Jimmy Carl Black!)