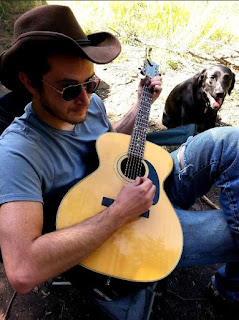 The mysterious Slackeye Slim will play LIVE on the Santa Fe Opry tonight, Friday, May 29 on KSFR.

Slackeye, known in the mundane world as Joe Frankland is responsible for at least three albums -- Texas Whore Pleaser, El Santo Grial: La Pistola Piadosa, and, his most recent effort, Giving My Bones to the Western Lands. (Follow the links to my reviews of the last two.)

Basically his albums are the musical equivalent to dark, troubling western movies, wild tales full of harsh landscape, desperate anti-heroes. Sometimes the songs are full of savage violence. Sometimes they're just soul-searching reflections by men with broken hearts (to sneak in a Hank Williams reference.) And many of his melodies are nothing short of gorgeous.

Slackeye's originally from Ohio, but like the troubled transients he sings about, Slackeye has knocked around the west these past few years, living in Montana, Colorado and now New Mexico.

So tune in tomorrow night and hear Slackeye Slim's songs and stories. You can listen live on KSFR's website, or, if you live in  northern New Mexico and parts of Albuquerque, at 101.1 FM.

I have one listener down there who tells me he sometimes drives out to the West Mesa to listen to my show on his car radio.

Tonight would be a great night to do that.

You can listen -- and buy (what a radical idea!) Slackeye Slim's most recent works HERE.

And meanwhile, here's one of his real purdy songs: