A version of this was published in The Santa Fe New Mexican
May 8, 2015 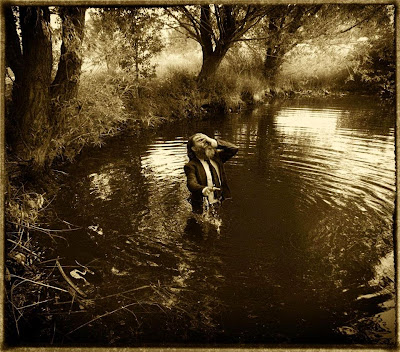 You can’t accuse Taos troubadour Chipper Thompson of flooding the market with his music. His new album, O How I Wish My Bad Heart Was True, is his first solo album in about a dozen years. And while the wait was too long, it’s a doggone fine collection of songs. In fact, it might be his best since his 1997 debut, Strange Lullabies.

Even though this is only his second solo album this century, Thompson has kept busy with his creative projects. He just published a novel, The Substance of Things Hoped For. He’s shown his visual art at Gerald Peters Gallery in Santa Fe. And he’s played in a number of Taos bands in the past few years, including Bone Orchard, Stray Ravens, and Kim & the Caballeros. The latter two were with his wife, Kim Treiber-Thompson.

Thompson, who’s been in Taos for 20 years or so, is a native of Alabama — and his Southern roots are readily apparent in his music. Listen to the dobro/mandolin-driven stomp “I Can Talk to Crows.” The harmonies — by Chipper and Kim — sound like something recorded at some backwoods church, perhaps after an intense round of snake handling. It’s basically a mystical brag-song, kind of a hillbilly “Hoochie Coochie Man.” One verse goes, “I can climb up a mountain like a hailstorm/And my fiddle can call down the rain and snow/I can tangle in your hair just like a bee swarm/And I can talk to crows.”

Although “I Can Talk to Crows” is now my favorite song here, other tunes have held that honor since I first got the album. “The Union Dues Blues” is an acoustic country waltz with a catchy, singalong-ready melody dealing with economic hard times. “If he can’t afford friends, a poor man is damned,” Thompson sings — a point well illustrated by the end of the song.

“Follow Me Down” is a slow burner that starts off with a hypnotic drone, followed by a strange but alluring fiddle solo. The first verse continues at a slow pace, but starts to build up, with drums coming in nearly halfway through. It’s quite effective and beautiful. As Chipper and Kim sing, “Won’t you sail away with me,” listeners may be tempted to sign up.

Thompson shows his Irish roots on “Edge of the Earth,” a nifty little jig about sailing to a foreign land. I can imagine some Celtic-punk band like the Dropkick Murphys covering this one.

And speaking of rockers, while the basis of Thompson’s music is folk, the boy can thunder when he wants, as he proves with some of the songs here. “Falling Off the World” begins with a brief banjo solo before the drums and electric guitars kick in. It’s an angry little tune about a romantic breakup.

Later in the album, there’s “Reap the Whirlwind,” which isn’t metal, but it’s downright heavy. “The storm is coming down, we’re gonna reap the whirlwind.” It sure is good to listen to new Chipper Thompson songs. I just hope I don’t have to wait another decade to say the same. 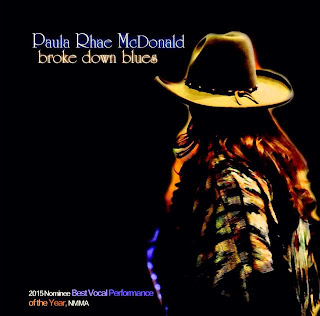 * Broke Down Blues by Paula Rhae McDonald. Four or five years ago I had the pleasure of hearing Paula Rhae McDonald sing for the first time. It was at a Frogfest Festival, produced by Santa Fe’s Frogville Records, and she was sitting in with Bill Hearne’s band.

Basically she nailed it, singing good old-fashioned honky-tonk music — covers and originals — with grace and righteousness. That led me to McDonald’s first album, Little Bird, a fine country album that includes “Crazy as a June Bug,” which she wrote when she was eleven.

McDonald is back with a new record, a six-song collection recorded at Frogville Studio. But don’t expect the same kind of country-honky swing we heard on Little Bird. Like the title indicates, this is blues — hard-edged, electric blues.

Whether it’s blues or country, this lady is a belter. She’s believable, too. When she’s directing her lyrics at some no-good man, I can’t help but think, “I’m glad I’m not the one she’s mad at.”

With the exception of “Little by Little,” written by B.B. King, all the songs are McDonald originals.

My favorite tune at the moment is “I Won’t Go and He Won’t Stay.” (She sings, “I won’t leave my happy home here in Fanta Se.”) Also notable is the title song, which musically is softer than the others. Though when McDonald sings, “He’s a low-down, broke-down fool,” it doesn’t seem soft at all.

While McDonald’s blues songs are a kick, I just hope she hasn’t completely turned her back on honky-tonk, because she’s such a fine country singer. But she’s from Texas, so I suspect that won’t happen,

There will be a CD release party for Broke Down Blues at 5 p.m. on June 12 at McDonald’s Little Bird Gallery at the Inn at Loretto. A portion of all CD sales will go to ARTsmart, which provides visual-arts education statewide.

Award nominees: Both Chipper Thompson and Paula Rhae McDonald are finalists for 2015 New Mexico Music Awards. The winners will be announced on Saturday, May 30, at Sandia Casino & Resort.

Of course I’m still feeling stunned that the video for Gregg Turner’s “Satan’s Bride” was snubbed for the award last year. (I played the role of Satan’s bride’s groom.) But I’m learning to accept that loss — by blaming Turner.

Here's a couple of videos.

Unfortunately I couldn't find any with their new songs. But here's some great oldies from these New Mexico favorites.

Here's one of my favorite Chipper songs from a long time ago. Unfortunately there's no visual here, but the sound is loud and clear. (And he even gives me a shout-out!)

And here's a classic Paula honky-tonk tune. (Hey, my old crony Chris Wright did this video!)