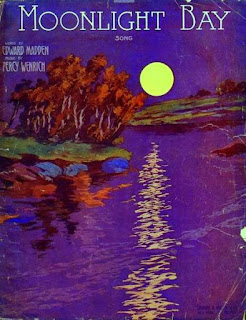 This is one of those great songs that I used to assume was part of every American's DNA. I'm talking about tunes like "The Man on the Flying Trapeze," "I'll See You in My Dreams,"  "Shine on Harvest Moon" or "I'm in the Mood For Love."

Notice I said "used to assume." Maybe I'm getting old and cynical, but these days I wonder if many people under the age of, say, 40 would even recognize those songs.

But I didn't come here to grumble. I came to celebrate one of those great old songs, one that pops in and out of my skull when I least expect it:

The song, originally published in 1912, features lyrics written by Edward Madden and music by Percy Wenrich.

The lyrics to "Moonlight Bay" are below. You probably won't recognize the verse. I suspect most people who know the song are familiar only with the chorus. 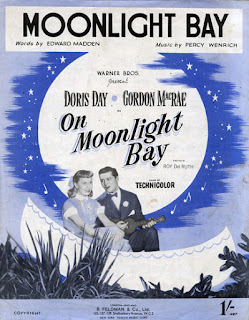 All alone, unknown they find me
Memories like these remind me
Of the girl I left behind me
Down on Moonlight Bay

Candle lights gleaming on the silent shore
Lonely nights, dreaming till we meet once more
Far apart, her heart, is yearning
With a sigh for my returning
With the light of love still burning
As in of days of yore


I'm not 100 percent sure this is the earliest version on record, but the American Quartet, featuring Billy Murray, a huge star in his day, recorded it in 1913.

Skip ahead a little more than 30 years, and we find Bing Crosby singing it with a vocal quartet called
The Charioteers -- a group that started out singing gospel but later branching out in to pop and jazz.
The Charioteers was the studio chorus from on der Bingle's Kraft Music Hall between 1942 and 1946. (A few years later Crosby recorded it with his son Gary in a faux Dixieland style.)

In the 1951 Doris Day vehicle called On Moonlight Bay, leading man Gordon MacRae, following a smug tirade against baseball, gives a harsh review of the song that gave the movie its title. My favorite line is when Bow-tie Daddy tells popcorn muching Doris, "That must have been written by a man with a glass of beer in one hand and a rhyming dictionary in the other."

Speaking of beer, often, epecially in cartoons, "Moonlight Bay" is associated with sentimental drunks. In this Porky Pig clip a bunch of drunken cats serenade. (UPDATE: The original video posted featured drunken fish. That one disappeared from YouTube.)

And in this early '60s British variety show, the comedy team of Morecambe & Wise team up with the Fab Moptops to sing ... you guessed it!

And now we have this guy: