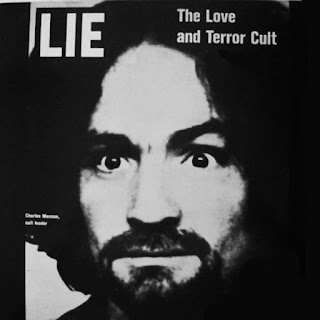 Shortly before I left my house to go do Terrell's Sound World at KSFR last night, I stumbled upon a two-part article by Steven L. Jones on the ever-bitchen Murder Ballad Monday blog: "How Charles Manson Murdered the '60s."

I've been a fan of that blog since earlier this year when I was writing about a bloody old murder ballad for a Throwback Thursday.

Murder Ballad Monday is part of The Sing Out website. Sing Out is a decades-old folk music publication, and indeed, most of the murder ballads covered there are traditional folk tunes. But not all of them.

Part one of the Manson story I found last night started out talking about an old Sonic Youth tune, "Death Valley '69" from their Bad Moon Rising album. (I got this vision of a frantic Pete Seeger having a Newport flashback and trying to unplug Sonic Youth with an ax.)

You can read read Part One HERE and Part Two HERE.

And hey, I just noticed that the first comment on Part One was none other than Rennie Sparks of The Handsome Family! (She's a fellow New Mexican too.)

Anywho, Jones' Manson pieces inspired me to slap together a set for my radio show last night, using some of the songs he talked about plus some other tunes. I just posted that set on Mixcloud.