UPDATED: I corrected the date of the Sons of Royalty show!

A version of this was published in The Santa Fe New Mexican
September 11, 2015


A ragtag band of British bikers on holiday are tearing through the West — from San Francisco to Santa Fe — while trying to live some crazy rock ’n’ roll dream. The tour features The Sons of Royalty, a grizzled group of rockers whose members have backed an amazing array of famous acts.

How can we stop this hog-riding menace?

For one thing, even though they’re bound to raise some hell, they’re also raising money for charity. The Sons of Royalty will be hitting Skylight in Santa Fe next Saturday, (Sept. 19), for a night of blues-rock and good times.

The British bikers (and participants who choose to travel by car) who are taking part in the tour have agreed to pledge at least 1,000 pounds to the ChildLine Rocks program, which is a free, confidential helpline  for children and teenagers in the United Kingdom, part of Great Britain’s National Society for the Prevention of Cruelty to Children. In Santa Fe,  proceeds from ticket sales will go to La Luz de Santa Fe Family Shelter.

“This year is the fifth Great British Invasion and sees the event head to the west of America for more Harley-based japes involving incredible rides and, quite possibly, the firing of guns (legally, of course). You’ll fly into San Francisco in mid-September and from there it’s an 11-day exploration on two wheels, taking in Yosemite, Death Valley, the Grand Canyon, Las Vegas, Route 66, the Sandia Mountains, and New Mexico (Breaking Bad country).”

The trip has been dubbed “Standing on the Corner: In the Footsteps of Bobby Troup.” If you don’t get the reference, he’s the guy who wrote the song “(Get Your Kicks On) Route 66.”

Last year, the invasion was a trip through the South, including stops at Sun Studios in Memphis and actor Morgan Freeman’s Ground Zero Blues Club in Clarksdale, Mississippi. Freeman himself appeared at that event, and the Sons of Royalty website implies that he might show up this year, telling potential travelers to bring extra cash for “all the drinks you’ll want to buy Morgan Freeman.”

You might not be familiar with the names of the individual Sons of Royalty, who have also played together under the name the Barnes Blues Band. But they have backed several big-time stars.

Guitarist and singer Bobby Tench, for example, has been a member of the Jeff Beck Group and he has recorded with the late Texas blues great Freddie King, Van Morrison (he played lead guitar on the Wavelength album), Eric Burdon, Humble Pie, reggae singer Junior Marvin (best known for his Clash-covered song “Police and Thieves”), and too many others to count. But having just recently seen the documentary Beware of Mr. Baker, I’m most impressed with the fact that Tench played, under the name Bobby Gass, on a 1972 Ginger Baker album (Stratavarious) with Nigerian wizard Fela Ransome-Kuti.

The other Sons aren’t slouches either.

The second guitarist/singer in the group, Papa George, has built a cult following as a blues artist. He started playing as a teenager at a Knightsbridge restaurant called the Borshtch ’n’ Tears. (Now that’s the blues!) And here is a local connection: In 2004 the guitarist played on the soundtrack of a movie called World Without Waves, which won the Best Southwest Film award at the Santa Fe  Film Festival that year. 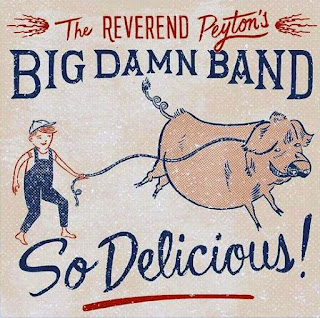 Another cool show: Sorry I didn’t give you more warning on this one, but down in Albuquerque on Friday, Sept. 11, The Reverend Peyton’s Big Damn Band is playing, and the pride of Española, The Imperial Rooster, is opening. The show is at  9 p.m. at Low Spirits (2823 Second St. NW), and tickets are $10.

Early this year, guitarist Josh Peyton and his band (wife Breezy Peyton on washboard and vocals and Ben Bussell on drums) unleashed their latest album, So Delicious, on the reconstituted Yazoo label. (The original Yazoo, which started in the 1960s, specialized in compiling old blues, hillbilly, and early jazz 78s.)

That seems appropriate for the Peyton crew. While the musicians are from Indiana, their heart is in the Mississippi Delta, and their sound harks back to those earthy sounds that came out of that region 80 years ago.

So Delicious continues the basic sound the Big Damn Band is known for, kicking off with the chunka-chunka rhythm of “Let’s Jump a Train,” which has a guitar hook similar to that of Creedence Clearwater Revival’s “Green River.” There is some (so) delicious slide guitar on “Raise a Little Hell,” while “Pot Roast and Kisses” continues Peyton’s tradition of linking romance and food. (See “Mama’s Fried Potatoes” from their 2008 album Whole Fam Damnily.)

Strangely, the most mellow song on the new album is called “Scream at the Night.” It’s downright pretty.

So Delicious is a fine album, and I’m hoping that at the Albuquerque show, the Reverend reaches back and does what I still consider the group’s greatest song: “Your Cousin’s on Cops,” which, yes, is about realizing the bad boy being busted on the TV show is a relative.

As for The Imperial Rooster, word is the Rev. Peyton gig will be their last one for some time. They've been playing only occasionally for the last year or so.

Another thing: I just found out last night -- way after I filed the print version of this column -- that none other than Slackeye Slim will be sitting in with the Rooster -- on music saw!

Here is The Sons of Royalty's Tench and Papa George in action a couple of years ago.