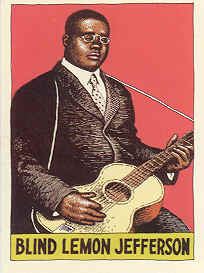 Sounds like a good time to celebrate the music of blind American country bluesmen.

There have been blind musicians basically every since there has been music. But in the American South in the early part of the last century there arose a tradition in which visually-impaired blues singers proudly proclaimed their disability and added "blind" to their names. 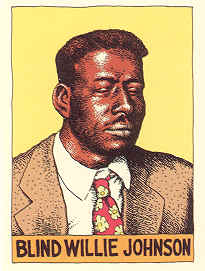 Or at least their record companies did.

I'm not sure whether being known as "Blind" Blake or "Blind"
Willie McTell actually helped record sales in those days. But these singers and the others below created some mighty fine tunes and American music would have been much poorer without them.

Blind Blake, aka Arthur Blake (1896-1934), came from Florida or virginia, depending who you believe. He recorded about 80 tracks for Paramount in the 20s and early 30s. Here he's singing a song that's been covered by lots of blues, jazz, jugband and country singers.

Blind Willie Johnson (1897-1945) also came from Texas. Most of his songs were religious but his slide guitar was pure blues.

The other Blind Willie probably is better known, Bob Dylan said it best: "I know no one can sing the blues / Like Blind Willie McTell." McTell (1898 to 1959) hailed from Georgia. He was known for picking a 12-string guitar. Here's a snappy little murder ballad that's best known for its versions by Johnny Cash.

Blind Boy Fuller (1907-1941) was a North Carolina bluesman whose real name was Fulton Allen. He wasn't born blind, but began to lose his eyesight as a teenager. He became known for his "hokum" numbers -- i.e. dirty songs. And he was good at it. Here is one of my favorites.

My token Caucasian here, Blind Alfred Reed, (188--1956), was an influential hillbilly singer from West Virginia. This next song has been covered by Ry Cooder and The Del Lords among others. It's a true anthem of the Great Depression.

Besides blind singers, in the realm of gospel music there also have been blind vocal groups. The most famous is The Five Blind Boys of Alabama. Leader Clarence Fountain still has an active group by that name. But my favorite is Archie Brownlee & The Original Five Blind Boys of Mississippi. Brownlee was born in 1925 and died in 1960. He was discovered by Alan Lomax singing with other students at Mississippi Blind School for Negroes, which was part of Piney Woods School near Jackson, Miss. Lomax recorded them in 1937. Heres a Blind Boys classic.