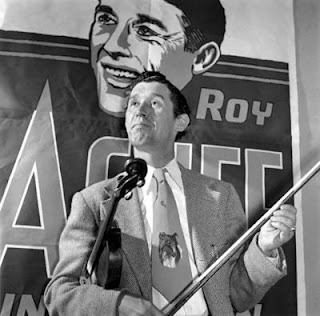 One hundred twelve years (and two days) ago in the tiny town of Maynardville, Tennessee, the Great Speckled Bird delivered a baby boy named Roy Acuff, who would grow up to become virtually synonymous with The Grand Ol' Opry ... and Hell, synonymous with country music itself for many years.

Of Acuff, Hank Williams was quoted saying,  "He's the biggest singer this music ever knew. You booked him and you didn't worry about crowds. For drawing power in the South, it was Roy Acuff, then God."

Here is a video tribute to Roy, who, with his band, The Smokey Mountain Boys, helped make a great music even greater.

Let's start with one of his best known songs, "The Wabash Cannonball."

"Mine heritage is unto me as a speckled bird, the birds round about are against her; come ye, assemble all the beasts of the field, come to devour." (Jeremiah 12:9)

I'm more familiar with Little Jimmy Dickens' version of this next one. But Roy's version is nice too.

Here's a team-up with Red Foley on another Acuff classic.


Finally, here's a weird musical connection: In the early days of the Acuff Jug Band, a young black kid played the jugs and spoons with the group. That might have been a goofy gig, but the kid, a Nashville native named Bobby Hebb, grew up to be a serious singer who had a huge hit in 1966 with a wonderful song called "Sunny." In the '70s Hebb cut a rocking soul version of Acuff's "Night Train to Memphis."

Hat tip to T. Tex Edwards for alerting me to Roy Acuff's birthday via a Google Plus post.
at September 17, 2015