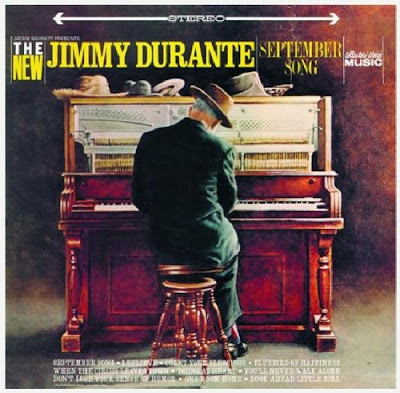 Here are some wonderful American songs that celebrate this ninth month of the year.

Let's start with the old Schnozzola himself, Jimmy Durante, singing one of his signature tunes, written by  by Kurt Weill with lyrics by Maxwell Anderson. It was first recorded in 1938 by Walter Huston. But I'll take Durante's cover.

Here's one from the 1960 off-Broadway musical The Fantastiks. It's sung by original cast member Jerry Orbach, who Law and Order fans will recognize as the actor who played Lenny Briscoe, the alcoholic wise-cracking police detective with the sad eyes and dark humor. ("Hope this doesn’t become habit forming," Lenny said over the corpse of a murdered nun.)


Now let's end this September salute with some disco-tinged funk from the late '70s with Earth, Wind and Fire.


Have a great month!