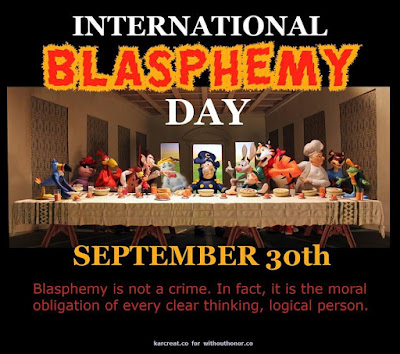 And my boss still wants me to go to work.

But this is serious. This little-known holiday is a tradition that goes back all the way to 2009. It originated with the Center for Inquiry's Campaign for Free Expression. According to the group's website, the day was created "to show solidarity with those who challenge oppressive laws and social prohibitions against free expression, to support the right to challenge prevailing religious beliefs without fear of violence, arrest, or persecution."

Blasphemy Rights Day is observed every September 30, the website says, "to commemorate the publishing of the Jyllands-Posten Muhammad cartoons, which angered religious believers around the world, many of whom expressed their disapproval with violent protests, riots, and in some cases, murder."

Yes in many parts of the world you can be jailed, executed or disappeared just by expressing ideas the ruling religion deems blasphemous.

Places ruled by Islamic fundamentalists is one example. And just a few years ago, Pussy Riot showed that blasphemy can land you in prison in Russia.

So I'm proud to be an American, to live in a land where you can blaspheme til you're blue and, even though you'll probably piss off a lot of believers, and maybe even get beat up by righteously outraged, usually your life and liberty won't be threatened.

In honor of the day here are three of my favorite examples of good old American blasphemy.

And, no, John Lennon's "Imagine" isn't one of them. First of all, he technically wasn't an American. But most of all, to commit a kind of blasphemy myself, the song just sucks. So many times I've heard it sung or quoted so solemnly by self-righteous hippies, I'd rather listen to Jonathan Edwards' "Sinners in the Hands of an Angry God."

Actually, I'd rather listen to these tunes.

Let's start with Cab Calloway. Back in the mid '60s, when I was in grade school in Oklahoma City, I saw Cab Calloway in person. He played with a small combo during the half time at a Harlem Globetrotters game. I had no idea who he was, but my grandmother, who took me to the game, was hep to that Hi-Di-Ho jive. I loved it, but I was stunned when Cab sang "It Ain't Necessarily So," a song from Porgy & Bess.It basically twisted my youthful Okie head off.

I didn't come from a religious family. We were not churchgoers. My grandmother used to delight in pointing out contradictions in the Bible. The extent of my grandfather's religious teachings was that Jesus loved the little children.

But in conservative Oklahoma most of my friends did go to church, and religion seemed to be everywhere. So when this crazy dude in a zoot suit sang "the things you are liable to read in the Bible, it ain't necessarily so ..." and poked fun at various Bible stories, it opened my eyes. And when Calloway went into his crazy scat singing, it sounded like wild demonic chants beckoning the listeners to follow him into an exciting and probably dangerous new world.

Here's a version of an older Calloway blaspheming away.

Sometimes I think Randy Newman in his prime was the closest thing to Mark Twain that My Generation ever had. That was because of wickedly subversive songs like this.

And here is Robbie Fulks exploring similar terrain. To me he never sounded like he was mocking any religious ideas with this song. He's always sung it with a certain sadness in his voice. And the melody is so pretty, it sounds like the Devil himself wrote it to lead good Christians to the fires.


So have a blasph on Blasphemy Day.