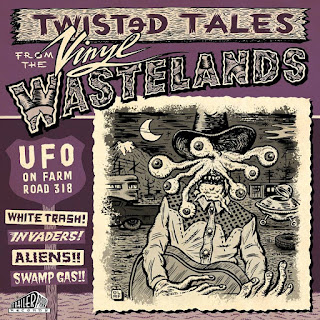 As I've said here many times before, I'm a huge fan of an amazing if obscure series of albums called Twisted Tales from the Vinyl Wastelands. I've been a devotee of these crazy CDs ever since my friend Sean at KSFR alerted me to their existence.

I wrote a Tune-up column about the series about five years ago (and a Wacky Wednesday pre-Halloween post just recently.)

Through the years I've played dozens of songs from Twisted Tales and on my radio shows and even did a segment of them on an episode of The Big Enchilada podcast.

So what is Twisted Tales From The Vinyl Wastelands?

As described in its own promo, the "series takes the listener on a dark adventure, a wrong turn into a bizarre, alternate world of American country music performed by small town, unknown hicks ..."

And as I wrote, "... in Twisted Tales you’ll find story songs, answer songs to popular hits of the day, and novelty songs. There are topical songs ripped from the headlines of the time and politically incorrect songs — some probably racist, or at least shockingly unenlightened. The tracks are full of sex. But there are usually tragic consequences attached to lovemaking. It’s the same with liquor and drugs or being a hippie."

Well here's some long-awaited news. Vinyl Wastelands mastermind G Minus Mark (who has a bitchen podcast called Truckers, Shuckers, Freaks and Geeks) has reimagined, reconfigured, reshuffled  and reconfluberated Twisted Tales into a new series with original artwork by Olaf Jens, which will be available on vinyl and digital as well as CD.

Volume One, called UFO on Farm Road 318, is available now. Volume Two, Beating on The Bars is set for release next month, You can order both HERE.

The original Twisted Tales CDs, 15 volumes, I believe, can be found at Norton Records.

And find out mroe at the Vinyl Wastelands Facebook page. 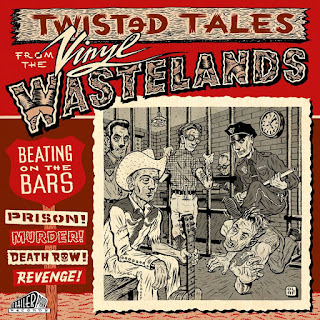