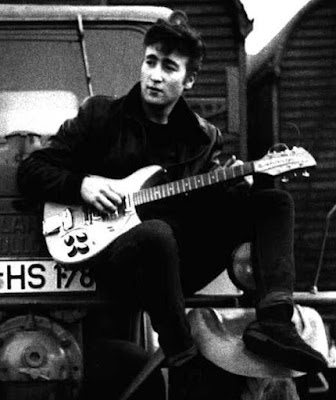 Hard to believe it's been that long since John Lennon was gunned down in New York City. This grim anniversary always brings back a flood of memories. I might have shared some (all?) of these thoughts before on this blog. But please indulge an old man.

Like most of us who were alive at the time, I found out about the killing on TV. I was in bed with my then wife, who was nearly eight months pregnant with our daughter. I'm not one of those to do much hand-wringing over "how can I bring a child into a world like this?" But that night was one of the few times I ever indulged in such despair.

The next day, I had a gig to sing some songs on KUNM's Home of Happy Feet.  while driving down to Albuquerque we were listening to the radio. There was a news report talking about Lennon's autopsy. We switched the channel. On that station they were playing The Beatles' "A Day in the Life." We tuned in right as Lennon was singing, "And though the holes were rather small, they had to count them all ..."

On Happy Feet, even though it wasn't part of my normal repertoire, I spat out one of the angriest versions of "Working Class Hero" imaginable. Years later my pal Erik Ness gave me a cassette tape of that radio performance. It brought back all that horror.