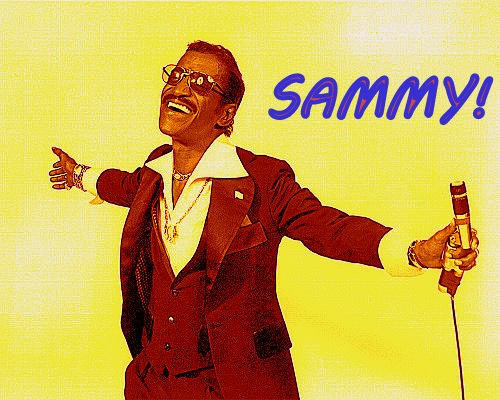 You don't know who Sammy was? Sammy did it all, baby. He sang, he danced, he told jokes, he acted in movies, he marched with Martin Luther King, he embraced Richard Nixon, he dabbled in Satanism,  he was an OG in the Rat Pack with Frank and Dino.

And he started young. At the age of seven, he was cast in the title role in a short called Rufus Jones for President, in which he sang this classic tune:


But of course Sammy only got more amazing as he grew older. Here's a starry-eyed song from 1954.

Some of my favorite Sammy songs were written by Anthony Newley. Dig these

At Sammy's funeral in 1990, his longtime pal Jesse Jackson gave the eulogy and frequently told those who loved the man to "let Bojangles rest."

And while I respect that thought, a talent like Sammy's never truly rests.