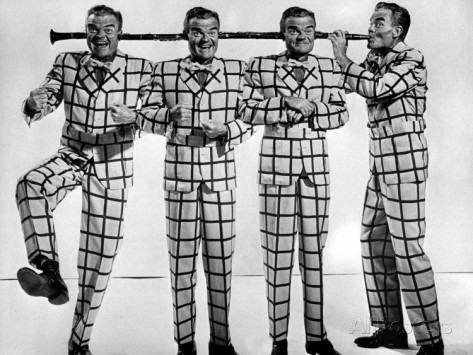 Lindley Armstrong Jones was born Dec. 14, 1911 in Long Beach, California. The son of a railroad man, young Lindley was nicknamed "Spike" at an early age. His unusual musical talent began to emerge early on.

According to various newspaper accounts, he got his first instrument at the age of 11 when "a negro cook" at a railroad lunch counter in Calexico, Calif. whittled two sticks from chair rungs and gave young Spike a breadboard to pound on. Reportedly he drummed along as he an the cook sang a duet of "Carolina in the Morning."

Jones started out as a jazz drummer and later got radio gigs with the likes of Bing Crosby and Fred Astaire. But he and the band that came to be known as The City Slicker had a knack for performing parodies of popular songs, and as Cub Koda wrote in the Allmusic Guide  "taking the air out of pompous classical selections ..."

"Not merely content to do cornball renderings of standard material or trite novelty tunes for comedic effect, Jones' musical vision encompassed whistles, bells, gargling, broken glass, and gunshots perfectly timed and wedded to the most musical and unmusical of source points. ... A definite precursor to the video age, Jones didn't merely play the songs funny, he illustrated them as well, a total audio and visual assault for the senses."

I'm reminded of Frank Zappa in Koda's description of Jones' role as bandleader:

"Spike was a strict bandleader and taskmaster, making sure his musicians were precision tight and adept in a variety of musical styles from Dixieland to classical, with a caliber of musicianship several notches higher than most big bands of the day that played so-called `straight' music."

Spike Jones had to be heard to be believed. So in honor of his birthday, coming up on Monday, here are some live television performances from the 1950s.

And here is one of Jones' best known songs from the 1940s.