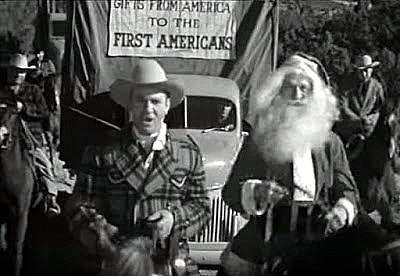 I believe that Gene Autry was America's greatest singing cowboy.

I realize that Roy Rogers fans would dispute that. But one thing that's not debatable is that Autry was America's greatest singing Christmas cowboy. He could claim that title just for writing the following holiday hit (performed in 1953 in this video.)

But Autry also wrote this song, which he sang in the 1949 movie "The Cowboy and The Indians," in which Autry helps the Navajos, including Jay Silverheels (who also played Tonto in The Lone Ranger) against an an evil trading post operator.  The movie poster says, "Autry Blasts Pale Face Renegades."


And while Autry didn't write this next song, he was the first to record it, back in 1950