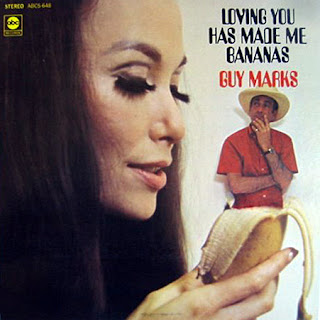 '60s nostalgia has been an annoying cultural phenomenon for way too many years. In fact I'm pretty sure it's been plaguing the national imagination since sometime in the early 1970s.

But back in the late '60s, some major (and minor) rock and pop musicians were busy perpetrating a nostalgia for music from even earlier eras.

Think of songs like "Winchester Cathedral" by one-hit wonders The New Vaudeville band, or "When I'm 64" and "Honey Pie" by The Beatles.

Think of a big chunk of the repertoire of The Bonzo Dog Doo-Dah Band.

The Rolling Stones did their part in 1967 on the last track of Between the Buttons. Most folks think the lyrics of "Something Happened to Me Yesterday" are about an LSD trip, though the additional of of the woozy sax and trombone (played by Brian Jones) give the tune a whimsical British Music Hall feel.

By the last 30 seconds of the song, the whole thing has morphed into a faux dance band radio broadcast with Mick Jagger serving as the smarmy announcer,: "So from all of us to all of you, not forgetting the boys in the band and our producer Reg Thorpe, we'd like to say God bless. So if you're out tonight, don't forget, if you're on your bike, wear white ..."

Jagger has been quoted saying, "The ending is something I remember hearing on the BBC as the bombs dropped." Take a listen:

Speaking of late '60s songs framed as live radio broadcast, a singer named Guy Marks had a minor hit in 1968 with this little treasure called "Loving You Has Made Me Bananas" that sounded like a Bizarro World version of a depression-era big band dance program. An announcer (Marks himself?) starts it off:

Then it gets downright silly.

I'm not sure whether this song came before or after a similar recording by San Francisco psychedelic heros Moby Grape. Their album WOW, released in April 1968 had a strange song called "Just Like Gene Aurty, a Foxtrot." This was a Skip Spence composition that featured a guest musician named Arthur Godfrey (!)  I'll let Graham Reid of the Elsewhere blog tell the story:

And what you got was an orchestra lead by Wow producer Lou Waxman and introduced by famous CBS radio and television announcer Arthur Godfrey who also played banjo and ukulele on it.

"Skippy bumped into Arthur at Columbia [Records]," said band member Jerry Miller later. "The two of them were like Mutt and Jeff, cruising around arm-in-arm. The funny thing was that Arthur Godfrey thought that Gene Autry was the kind of music we did all the time."

Godfrey kicked off the proceedings:

And now, emanating from the Secaucus Lounge of the fabulous Fandango Hotel in Weehawken, New Jersey, we proudly present the celestial melodies of Lou Waxman and his Orchestra, who ask the age old musical question...

And, with Spence crooning like Guy Lombardo on Thorazine, here's what emanated:

So in conclusion, I'll let Frank Zappa have the final word: