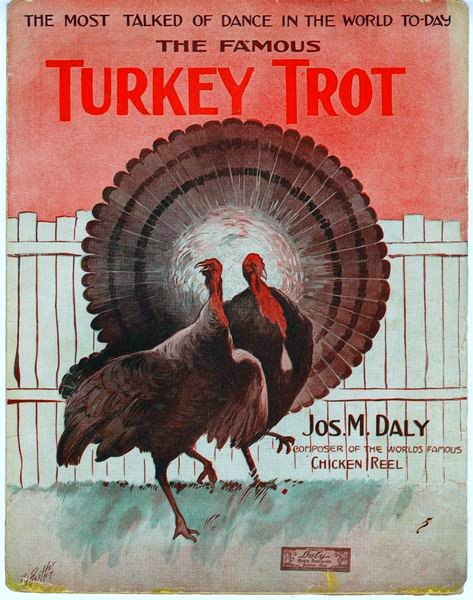 Every Thanksgiving while counting my blessings and stuffing my face, I think of Little Eva and "The Turkey Trot," her follow-up to her big hit "The Loco-Motion."

Here she is singing on Shindig in 1965, backed up by The Shindogs and The Blossoms.

I was always fascinated with the line "My grandmother taught this dance to me. She did it at the turn of the century.

It's quite possible if Little Eva's grandmother was of dancing age in the early 1900s, she indeed was doing the Turkey Trot. It was a dance craze fueled by the rise of ragtime music.

According to an NPR History Department story last year:

Dances that drew partners close together — along with touching and embracing and all that stuff — became flashpoints for public outrage. They were badmouthed and banned from coast to coast.

Fears that party-goers might do the Bunny Hug or Turkey Trot may have even led to the cancellation of the official inaugural ball of newly elected President Woodrow Wilson in the spring of 1913.

... In the summer of 1909, a bellboy in San Francisco, according to the local Chronicle, was arrested for doing the Turkey Trot at a dance hall. "I can't dance any other way," he told the judge.

If indeed Little Eva's grandmother was Turkey Trotting back in that time, here are some of the songs she would have been dancing to.

Here's a variation by Arthur Pryor, combining the Turkery Trot with another popular "animal dance" of the era, The Grizzly.


And going back even further, this is a wax cylinder recording from 1908 by the American Symphony Orchestra.