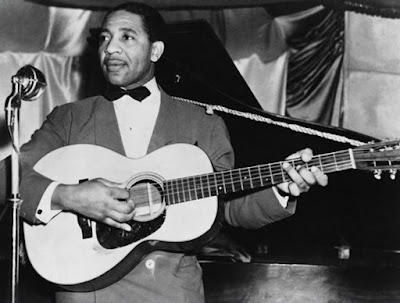 Alfonzo "Lonnie" Johnson, one of the most respected singers, guitarists and stylists to ever come from the world of the blues, was born Feb. 8, 1899 in New Orleans.

He started playing guitar and violin in his family's band, doing gigs at weddings and banquets. In 1917 he joined a traveling revue that toured England. When he returned home two years late he learned that his entire family, except his brother James Johnson, had died in a flu epidemic. He and his brother moved to St. Louis, where the two got music gigs on riverboats.

In 1925, Lonnie won a blues contest sponsored by Okeh Records. Part of his prize included a recording contract.

That turned into a good deal for everyone.

Johnson died in 1970. But he left us some glorious music.

Here is one of Johnson's early records, "Ball and Chain Blues," recorded in 1926.

"Racketeer Blues" from 1932 might be called "Gangsta Blues":  "When the gang is out to get you, it don't do no good to run," Lonnie sings. "It's true you can dodge the law, but you can't dodge them slugs out the machine gun"

Johnson recorded jazz as well as blues. He played in bands fronted by Duke Ellington and Louis Armstromng. Here is a 1929 record by Louis Armstrong & The Hot Five, featuring Johnson on guitar.

This is one of my favorites, a hit from 1948. Elvis Presley later recorded "Tomorrow Night" at Sun Studios.

Here's a 1963 performance from The American Folk Blues Festival, a package show featuring some of the greatest blues stars of the ea -- and previous eras. Sonny Boy Williamson introduces Lonnie, who is backed by Otis Spann on on piano, Willie Dixon on bass and Bill Stepney on drums