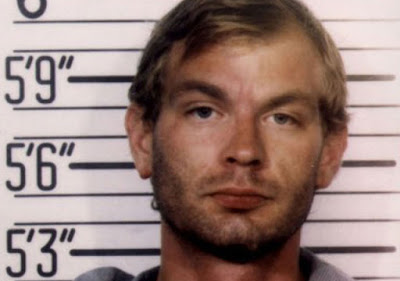 Twenty five years ago today a jury in Milwaukee, Wisc. found Jeffrey Dahmer sane and guilty of murdering 15 men and boys between 1978 and 1991.

This led to a life sentence for each of those killings.

But Dahmer is infamous not only for murder and rape, but for his habit of  torturing, and dismembering his victims, having sex with their corpses and even eating their body parts.

He began killing around one person each week by the summer of 1991. Dahmer was using the idea that he could turn his victims into “zombies” to have youthful submissive sexual partners. He used many different techniques, such as drilling holes into their skull and injecting hydrochloric acid or boiling water into their brains. Soon, residents of Oxford Apartments complex began noticing awful smells coming from Dahmer’s apartment, as well as loud noises from falling objects. Although most serial killers stick with one racial background, Dahmer killed a variety of people from different racial backgrounds.

... Further investigation of the home lead to a severed head in the refrigerator, three more severed heads in the apartment, multiple photographs of victims and human remains and more human remains in his refrigerator. It was later assumed that he practiced necrophilia and cannibalism. A total of seven skulls were found in his apartment as well as a human heart in the freezer. An altar was also constructed with candles and human skulls in his closet.

Yep. All the prefect ingredients for a good pop song!

Dahmer, who was murdered in prison in 1994, inspired a few songs. Here are a few of them

First, as an appetizer, (sorry) here's this brief ditty from Dahmer's fellow Wisconsinites, The Violent Femmes:

Here is one from the mighty Dead Moon, immortalize the apartment where about half of Dahmer's killings occurred.


Most of Dahmer's "tribute" songs come from the genre of death metal. I'm not sure why.

Pearl Jam even took a whack at Dahmer. But for reasons I'm not quite sure of, they changed his first name to "Frank."

Dirty Frank Dahmer, he's a gourmet cook / Got a recipe for Anglo-Saxon soup ...I got a cupboard full of fleshy fresh ingredients / Very careful, at the same time quite expedient ... 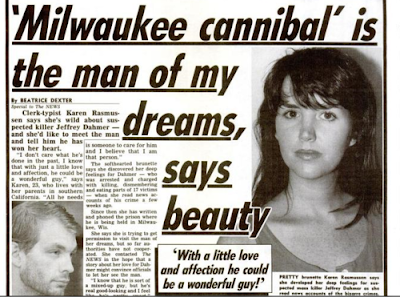