THROWBACK THURSDAY: See You in My Dreams (Part 2) 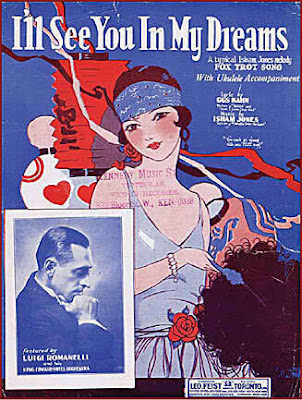 Back in December 2014, just a few weeks after I started the Throwback Thursday feature on this blog, I did a look at one of my favorite old songs from the 1920s, "I'll See You in My Dreams."

Written by Isham Jones and lyricist Gus Kahn and published in 1924, and first recorded by the Ray Miller Orchestra (vocals by Frank Besinger) in 1925, "I'll See You in My Dreams" became an instant American classic.

Khan's lyrics seem almost like a mystical incantation, an opening of the door into the world of dreams:

You can find Ray Miller's version of "Dreams" and several others in that original post.

But there have been so many wonderful covers of the song in the past 90 years or so, I believe my original post deserves a sequel.

Thrill to the charms of the ever-sultry Julie London, who sang it on her 1968 album, Easy Does It.

Fast forward to the 1990s and you'll find The Asylum Street Spankers singing it on their first album.

British rocker Joe Brown sang it as the closing number of a tribute concert for George Harrison at the Royal Albert Hall in 2002. [Update 5-29-22: That clip apparently was taken down off Youtube. This video is from a different show.]