THROWBACK THURSDAY: Laid Around, Stayed Around This Old Town Too Long 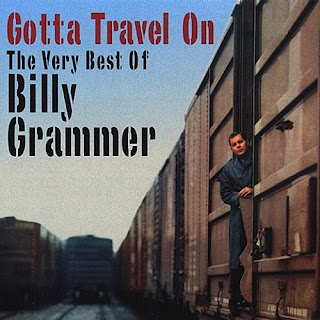 This week on Throwback Thursday I'm going to look into a great old country song that's been covered so many times by so so many great singers, many folks have forgotten -- if indeed they ever knew -- who did it originally.

And yes, I'm among them. I had to look it up before I learned that the song originally was recorded in 1959 by a singer named Billy Grammer.

According to The AllMusic Guide, Grammer was a pretty accomplished dude.

He was one of 13 children born to a coal-mining family in downstate Benton, Illinois. Despite a youthful interest in science and engineering, the young Grammer often played fiddle, guitar, or mandolin at local gatherings, accompanying his father or performing solo. He served in the U.S. Army during World War II, and worked as an apprentice toolmaker. But after discharge, work was scarce for an eager young musician. When Grammer heard about an opportunity with Connie Gay's Radio Ranch, he hitchhiked to Arlington, Virginia; auditioned; and made the cut. Two years later, he made his recording debut. In 1955, Gay suggested to Jimmy Dean that Grammer join his television show. During his years on The Jimmy Dean Show, Grammer was a sideman in several bands, including those of Clyde Moody, Grandpa Jones, and Hawkshaw Hawkins.

And according to the New York Times:

Mr. Grammer also designed and produced flat-top acoustic guitars under his own name through a company he started in the 1960s. He donated his first model to the Country Music Hall of Fame in 1969, and in 2004 Sotheby’s sold an abalone inlay acoustic model played by Johnny Cash for $131,200.

And here's something weird. On May 15, 1972, Grammer and his band, The Travel On Boys played at the George Wallace rally in a Laurel, Maryland shopping center when Arthur Bremmer shot and critically wounded Wallace, leaving the former Alabama governor in a wheelchair for the rest of his life.

But enough talk, let's get on with the music. Here's a live version of "Gotta Travel On" by Billy Grammer.

The first version I ever heard of "Gotta Travel On was on sausage baron Jimmy Dean's 1961 album Big Bad John and Other Fabulous Songs and Tales.

Bill Monroe was a fan of the song. It was on his 1962 album My All Time Country Favorites.

And more recently, in 2013, French rocker Rev. Tom Frost did a "graveyard blues" cover of the song on his Bloody Works album


UPDATE 9:30 pm 6-29-17
A reader, Tom from New Jersey, informed me about a blog, Chimesfreedom, that has far more information on this wonderful song.

First of all, "Gotta Travel On" has very similar predecessors recorded years before Billy Grammer's hit. Here's one called "Police and High Sheriff Come Ridin' Down" from 1927 by bluesman Ollis Martin.

Chimesfreedom points out that the song we've come to know as "Gotta Travel On" was copyrighted in 1959 by  Paul Clayton, Larry Ehrlich, David Lazar, and Tom Six. Clayton was active in the Greenwich Village folk scene of the '60s.

Now I'm not certain that's true that Lazar was a pseudonym for Seeger. According to a 2002 obituary for David Lazar in the Washington Post, Lazar, who was best known as a diplomat:

had some early success as a lyricist. He helped write words for popular tunes that included "Gotta Travel On," which was recorded by Pete Seeger, The Kingston Trio, Bob Dylan and countless others. ...

During his youth in Chicago, Mr. Lazar liked to hang out in blues, folk and jazz clubs. He heard Pete Seeger in the 1950s and was among a small group, including Paul Clayton, that helped Seeger write new lyrics to the tune later recorded as "Gotta Travel On."

But apparently Seeger was involved at some level. What rich irony that a troubadour for George Wallace got famous on a song written by a bunch of coffee house folkies who were blacklisted during the McCarthy era.

Plus Chimesfreedom linked to another blog that reminded me that Neil Young & Crazy Horse did this song on their Americana album.