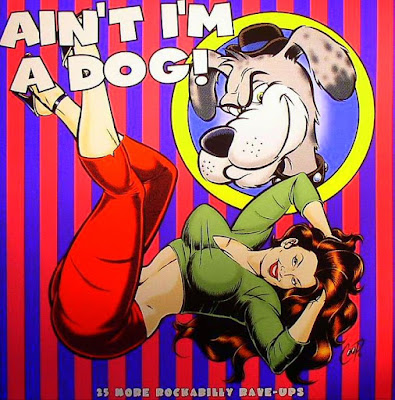 So this Wacky Wednesday is for Rocco. It's a set of  wacky tunes about man's best friend. I think my best friend would wag his tail for these.

Let's start out with Sam the Sham & The Pharoahs ode to a cartoon canine lawman, Deputy Dawg.

"Marie Provost" is Nick Lowe's sardonic ode to Marie Prevost (he calls her "Provost") the one-time movie star who died in January, 1937, She died of malnutrition, basically drinking herself to death at the age of 38. According to Hollywood legend -- perpetrated by a chapter in Kenneth Anger's scurrilous Hollywood Babylon -- she was eaten by her own pet dachshund, Maxie. That gruesome tale is widely disputed, though it inspired Lowe's song.

Rockabilly Ronnie Self offers this shoulda-been-a classic tune that's not only a bitchen rocker, but also an pioneering experiment in radical grammar: "Ain't I'm a Dog."