Mel Brooks, the comic force behind some of the funniest movies of the '70s, turns 91 today.

Though he's basically known as a comedian, writer, director, producer and actor, Brooks also had an ear for music. The songs in his movies helped make them memorable

To celebrate his birthday this Wacky Wednesday here are some of the best songs from his films.

In Young Frankenstein Gene Wilder as Dr. Frankenstein and Peter  Boyle as his monster teamed up for a rendition of "Puttin' on the Ritz."

Robin Hood: Men in Tights was one of Brooks' later movies (1993.) Here  Cary Elwes as Robin Hood serenades Maid Marian (Amy Yasbeck) with "The Night is Young and You're So Beautiful," a song Dean Martin recorded a few decades before.

Brooks himself sings the theme of his 1977 Hitchcock spoof High Anxiety in a hotel lounge. He wrote the song too.

But music-wise I don't believe Brooks ever topped this glorious anthem from his 1968 film The Producers. 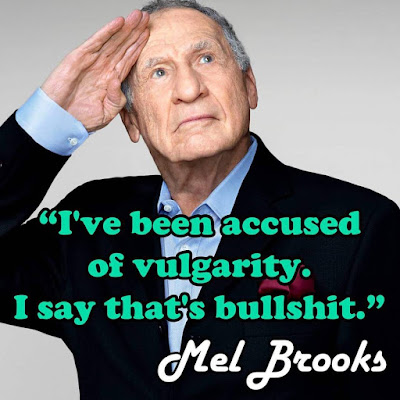