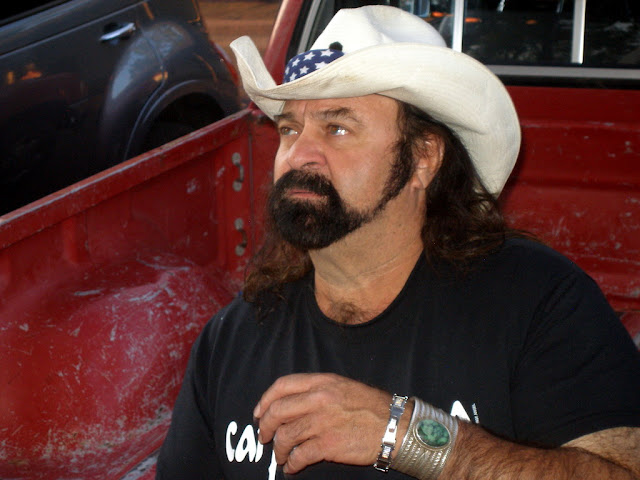 This one I can't believe. Just one day after Al Hurricane ...

George Adelo died yesterday. He was a friend of mine. At this point I don't know the exact cause of death, but apparently he'd been very ill for at least several days.

A Pecos resident, George had a local band called White Buffalo. I saw them many times, once, a few years ago, backing rock 'n' roll sax giant Bobby Keys at Buffalo Thunder casino. Sometimes he played under the name of Georgie Angel.

Late last month White Buffalo lost its drummer, Jimmy Varela who died at the end of a performance in Pecos.

He also had been a member of Junior Brown's road band. (Like George and me, Junior went to high school in Santa Fe in the late '60s and early '70s.)

But, believe it or not, my first dealings with him -- except for a few times we might have crossed at parties during our high school and college years -- was not related to his work as a musician, but to his legal practice.

I was covering a story about 3 Northern New Mexico kids who broke into a bar and used the money to go to California where two of of them eventually were convicted for the murder of a woman on Zuma Beach. George was representing the kid who wasn't charged. That was back in the days when newspapers had travel budgets, so they sent me to California to cover the trial of the other defendants.

I called George for comment and said, "Hey George, I'm calling from LA ..."

I had a feeling we'd be friends from then on.

A funny Adelo story that popped in my head this morning while trying process George's death: One night several years ago he called me at KSFR when I was doing The Santa Fe Opry. "Hey Steve, cold you play a real romantic song for me. I'm with this beautiful woman ..."

One of the songs I had cued up was the Frank Zappa/Jimmy Carl Black song "Harder Than Your Husband." I couldn't resist. Before playing it, I said "Here's a romantic song for my friend George ..."

He called up immediate yelling "What the hell are you doing to me?!?!?!"

He was a sweet, funny, caring man who loved music, loved New Mexico, loved his family and friends ... So much more I want to say.

George, you son of a bitch!