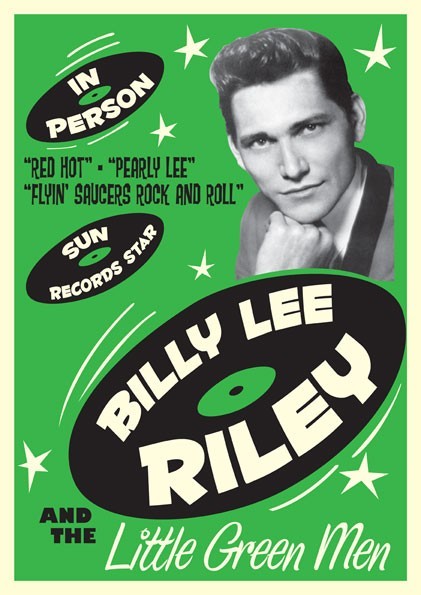 Born in Pocahontas, Arkansas exactly 84 years ago (Oct. 5, 1933),  Riley was the son of  a sharecropper who learned to play guitar from Afican-American farm hands.

Riley, who died in 2009,  never got as big as Elvis or Carl Perkins or Jerry Lee Lewis (who played piano on his biggest hit), or other Sun Records stars.

You must realize that Commies and aliens were out to destroy America -- and some truly believed that a bunch of wild-eyed hillbillies playing savage, unholy music were leading the way.

But it in the years before "Flying Saucers," in the early 1950s,  Riley gigged around Arkansas in various bands, including one called The Dixie Ramblers, which included Cowboy Jack Clement. Clement and fellow Rambler Slim Wallace recorded a couple of sides by Riley in 1956, which impressed Sam Phillips, who released a single for Sun Records.

Another classic Riley song for Sun was "Pearly Lee."

"Pearly Lee was the flip side of  "Red Hot," a song originally recorded by Billy "The Kid" Emerson for Sun Records. (Confession: The first version I heard was the mid-60s cover by Sam the Sham & The Pharaohs.)

Bob Dylan, who befriended Riley decades later, thought "Red Hot" was was Billy Lee's masterpiece. Here's what Dylan said about the song just a couple of years ago at the 2015 Grammy Awards:

"So Billy became what is known in the industry -- a condescending term, by the way -- as a one-hit wonder. But sometimes, just sometimes, once in a while, a one-hit wonder can make a more powerful impact than a recording star who's got 20 or 30 hits behind him. And Billy's hit song was called "Red Hot," and it was red hot. It could blast you out of your skull and make you feel happy about it. Change your life. "

And later, Riley would even make a music video for the sexy, sleazy Scopitone company. (I've featured Scopitone a couple of times HERE and HERE