Seventy eight years ago today, in the city of New Orleans a baby boy named Lee Harvey Oswald was born. He would grow up to change America.

As a young Marine he defected to the Soviet Union. But just a few years later he returned to the U.S. with his Russian bride.

Then, on Nov. 22, 1963, from a window of the Texas School Book Depository, he shot and killed President John F. Kennedy.

Unless you believe Oswald when he says he was just a Patsy.

Whatever the real story is, Oswald inspired some wild songs -- good, bad, ugly and beyond -- through the years.

Here are some of them. Let's start with that wigged out Texas combo, The Butthole Surfers, who to this day insist that "The Shah Sleeps in Lee Harvey's Grave."

The Skatalites recorded this instrumental named for the assassin in Jamaica in the mid '60s -- while JFK's murder was still fresh on everyone's minds.

This one, "Love Song from Lee Harvey Oswald to Jackie Kennedy" by a guy named Albert DeMuth, is dark and abstract. It was released in October 2016.

And I would quell your endless doubt
to be the lover you call
with my back against the world
and my ear against your wall.


I just stumbled across this little piece of outsider art, posted only a couple of days ago. I wonder if the FBI has already visited Mr. Tommy Daniels.

But this Homer Henderson classic, "Lee Harvey," which also has been recorded by The Asylum Street Spankers, T. Tex Edwards, The Rockin' Guys, Laura Cantrell, Lucy Falcon and others, is the greatest Oswald song of all.

If you're into this sort of thing, check out my Tune-up column from a few years ago in which I reviewed Norton Records' Songs from The Grassy Knoll and the Conspiracy a Go-Go compilation from Turn Me On Dead Man Records. 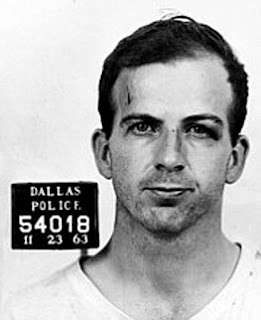