THROWBACK THURSDAY: The Band Played On 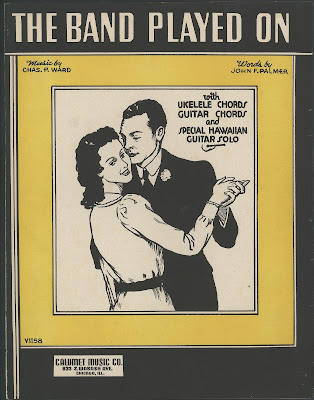 Maybe I heard it on TV.

Maybe someone who seemed to know what he or she was talking about told me and I believed it.

Maybe it came to me in a dream.

I don't know where I got this idea, but somewhere I heard that Frank Sinatra -- yes Frank Sinatra, dammit -- once said that the saddest song he ever heard was a strange old American song from 1895 called "The Band Played On."

Even with the magic of Google I can't verify if this is true. I can't even find any Sinatra covers of the song.

And damn, I want to believe it!

Most of the versions of this tune -- with lyrics by John F. Palmer and music by Charles B. Ward -- don't play it for the sadness. Often it's played for laughs.

But when you think about it -- it's there. While Palmer's lyrics allude to love and good times, there is tension just under the surface. Disaster is just around the corner.

The song is about this guy named Casey who's on the dance floor with a "strawberry blonde" -- "the girl he adored."

But things aren't going well for poor Casey. He's whacked out of his mind on booze or who knows what.

... his brain was so loaded it nearly exploded;
The poor girl would shake with alarm.

He loves this woman but he's not sure what to do and he's only succeeding in terrifying her. But Casey is determined.

He'd ne'er leave the girl with the strawberry curls
And the band played on.

Maybe she can escape his clutches after he falls on his face. Or maybe they're married and there's no way out for her

But it's obvious there will be no happy ending here for Casey or the blonde.

Of course I'm just talking about the chorus of the song. Most folks in the modern era who know the song are not familiar with the verses. But as far as I'm concerned, that's just as well. The song's power is in the image of Casey about to spin out of control as his partner hangs on, trying not to panic.

Here's a 1941 version by a group called The Jesters

You know if the Hoosier Hot Shots covered something I'm writing about, I'm going to include it. Are you ready, Hezzie?

And this is a fairly recent one by Richard Thompson from a 2013 compilation of "turn-of-the-century" songs called The Beautiful Old. I love Thompson and I love this version, even though he tacks on a sappy ending, undercutting the beautiful terror of Casey's drunken waltz.

Sean at KSFR did some fancy Googlin' and found a Frank Sinatra fan forum that shows Ol' Blues was at least familiar with this song and apparently had performed it a couple of times.

Back in the 70s I caught Frank Sinatra several times at the Westchester Premier Theater. In one show he stunned the audience by turning down the lights except for maybe a single spot light, sat on a stool, and sang the oldie "Casey Would Waltz With the Strawberry Blond". Very little, if any, accompaniment as I recall. It is one of the memories I've treasured through the years. He may have sung another song along with it but I don't remember what it was.

Larry, it may interest you to know that Sinatra FIRST sang "The Band Played On" in a Songs By Sinatra (Old Gold Cigarettes) CBS radio show, as part of a medley with solo piano accompaniment by André Previn, September 25, 1946.

The Westchester Premier Theater performance which you mention (second show of the day) occurred 30 years later TO THE DAY, on September 25, 1976, with Bill Miller doing the solo piano honors.

Those are the ONLY two documented performances of this song by FS.

Unfortunately, in a later post Bob says there is no known recording of this radio show.

I did a little Googling myself and found a mention of the 1946 radio set on a German site.

1. Night And Day
2. Blue Skies
3. And The Band Played On
4. I Wonder What's Become Of Sally
5. After The Ball
6. I Wonder Who Kissing Her Now
7. On The Boardwalk In Atlantic City
8. The Things We Did Last Summer
9. September Song
10. Put Your Dreams Away