Gene Autry is best known as one of the original singing cowboys. But in 1949 he also had become known as one of the country's top purveyors of Christmas novelty songs for kiddies. He wrote and recorded "Rudolph the Red-Nose Reindeer" as well as "Here Comes Santa Claus." Later, he's become the first to record "Frosty the Snowmen."

So it didn't seem like such a crazy idea to try to bring some of Autry's Christmas magic to another holiday. Songwriters Steve Nelson and Jack Rollins -- the guys who wrote "Frosty," convinced Autry to record another one of their compositions in 1950: "Peter Cottontail." And damned if that rascally rabbit didn't grab a lot of carrots.

(Actually Autry wasn't the first to record "Cottontail." That honor went to a singer named Mervin Shiner, who recorded it earlier in 1950.)

Here's Autry performing "Peter Cottontail" in a 1951 western called Hills of Utah. I've never seen it, so I'm not sure what's going on in the scene. (And I'm really not sure about the pervy-looking dude who gives the little girl a stuffed rabbit.)

Autry tried to repeat his "Cottontail" success Easter in 1951 with this double-sided rabbit record. It didn't quite work.

At least on the flip side, "Bunny Round-up Time," Autry returned to his cowboy roots. 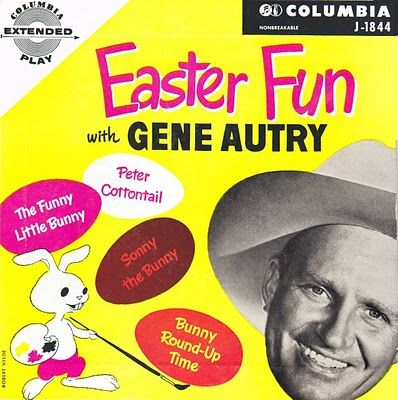