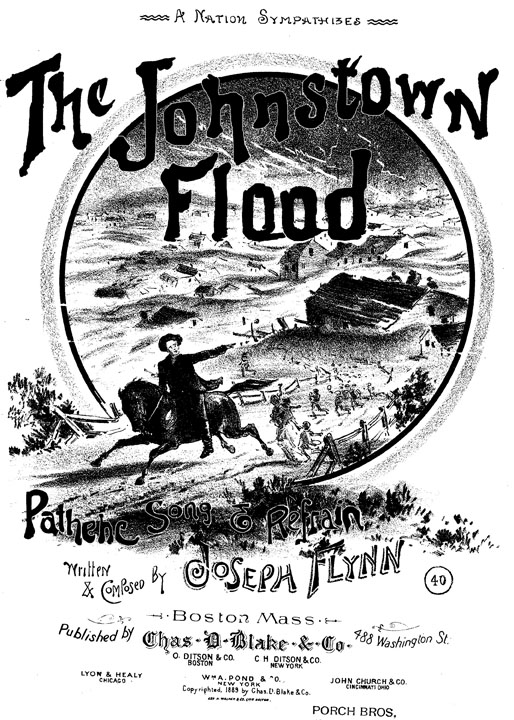 One hundred and twenty nine years ago the South Fork Dam near Johnstown, Pennsylvania broke. creating a flood that killed at least 2,200 people.

A little history from History.com:

Johnstown is 60 miles east of Pittsburgh in a valley near the Allegheny, Little Conemaugh, and Stony Creek Rivers. It is located on a floodplain that has been subject to frequent disasters. Because of the area’s susceptibility to floods, a dam was built in 1840 on the Little Conemaugh River, 14 miles upstream from Johnstown. Nine hundred feet by 72 feet, it was the largest earth dam (made of dirt and rock, rather than steel and concrete) in the United States and it created the largest man-made lake of the time, Lake Conemaugh. The dam was part of an extensive canal system that became obsolete as the railroads replaced the canal as a means of transporting goods. As the canal system fell into disuse, maintenance on the dam was neglected.

In 1889, Johnstown was home to 30,000 people, many of whom worked in the steel industry. On May 31, the residents were unaware of the danger that steady rain over the course of the previous day had caused. A spillway at the dam became clogged with debris that could not be dislodged. An engineer at the dam saw warning signs of an impending disaster and rode a horse to the village of South Fork to warn the residents. However, the telegraph lines were down and the warning did not reach Johnstown. At 3:10 p.m., the dam collapsed, causing a roar that could be heard for miles. All of the water from Lake Conemaugh rushed forward at 40 miles per hour, sweeping away everything in its path.

Floods this devastating frequently end up being the subject of folk songs and even pop songs. The website for the Johnstown Flood Museum lists three such songs that were written not long after the tragedy. These include "That Valley of Tears," composed by William Thomas, "My Last Message" by J.P. Skelly, and Joseph Flynn's "The Johnstown Flood," which possibly is the song Bruce Springsteen refers to in "Highway Patrolman." ("Takin' turns dancin' with Maria as the band played `Night of the Johnstown Flood' ,,,")

I searched but couldn't find any versions of these songs. However, on YouTube I did come across three Johnstown flood songs, all by artists I'd never heard of. But they sound pretty cool, so here they are.

This one by a Nashville group called Chicken Little. (Another chicken song?)


This is by the Rock Creek Jug Band from Chico, California.


And this song, billed as "relaxing blues" is by a New England group called Delta Generators