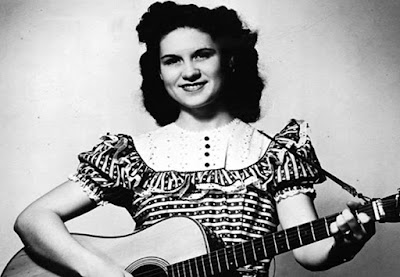 On this day 99 years ago, a girl named Ellen Muriel Deason was born in Nashville. She learned to play guitar from her father, who was a railroad brakeman (I guess Jimmie Rogers wasn't the only singing brakeman) and she began singing with her sisters as The Deason for a local radio station in 1936.

Ellen married a singer too -- Johnnie Wright, who later would become part of the famous hillbilly duo Johnnie and Jack. Before that, however, Wright sang with his wife and sister Louise under the name "Johnnie Right & The Harmony Girls."

It was Wright's idea to give Ellen a stage name. He got it from an old folk song called "Sweet Kitty Wells."

Kitty began recording in 1949 on RCA Records. She didn't have a major hit, however, until 1952 when she recorded an "answer song" to Hank Thompson's "The Wild Side of Life."

The song was as controversial as it was popular. Back then, female singers weren't supposed to be talking back to men -- especially in the world of country music.

"It's a shame that all the blame is on us women..." Scandalous!

Some radio stations banned it -- as did The Grand Old Opry initially. But the public loved it. A star was born.

But there was much more to Kitty than answer songs. "Making Believe" is a classic.

Here's a good honky-tonker, "I Heard the Jukebox Play."

She also asked that age-old musical question, "Will Your Lawyer Talk to God."