TERRELL'S TUNE-UP: Fresh From the Kitchen

A version of this was published in The Santa Fe New Mexican
Octber 11, 2019 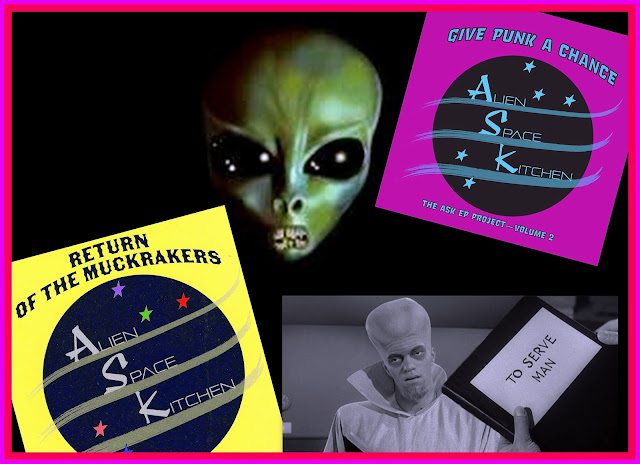 Besides their music, one thing I like about the “garage-punk space-pop” trio from Albuquerque known as Alien Space Kitchen is that they have a better record of keeping promises than most politicians.

Early this year, they self-released The Golden Age of Climate Change: The ASK EP Project, Volume 1, a 7-song burst of joy concerning the pending last gasp of human history. I enjoyed that EP but took the group’s plan to release a new CD every three months with a grain — no, actually a pillar — of salt.

But my skepticism was for naught. By early summer Alien Space Kitchen — which consists of singer/guitarists Dru Vaughter, drummer/vocalist Noelle Graney and bassist Terry “Mess” Messal — released Give Punk a Chance: The ASK EP Project, Volume 2. Then just a few weeks ago they added Return of the Muckrakers: The ASK EP Project, Volume 3 to their discography. So they’re pretty much on schedule. 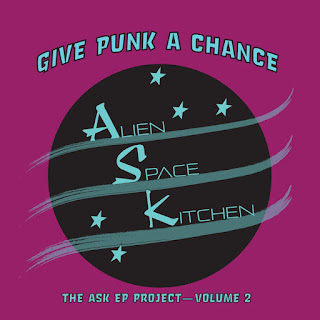 As the title might imply, most of the eight tunes on Give Punk a Chance are slightly faster, slightly harder-edged and slightly punkier than most of ASK’s music (though their fans shouldn’t have any trouble recognizing the band).

“It’s so easy you will see/It’s not rocket surgery,” Vaughter sings on the title song, before launching into an unexplained refrain of “God is dead, don’t ask me if I care.”

Another highlight of this EP is the urgent-sounding “505,” a salute, if backhandedly so, to the band’s homeland. “I’ve done my time in the 505,” goes the chorus.

The EP exits with “Enter the Void,” at just over four minutes, the longest song on the record. It starts out with some uncharacteristic acoustic guitar strumming. The electricity soon comes back on, though, and the tempo quickens. By the chorus, it sounds like full-fledged punk rock.

The lyrics deal with “lessons” learned at school: “Today at school they learned me how/to disavow the here and now.” Such observations are intertwined with sly references to classic advertising slogans. “Maybe I should give it up/’cause I’m not feelin’ 7-Up,” Vaughter sings, (reminding me of one of my favorite scenes in Repo Man.) 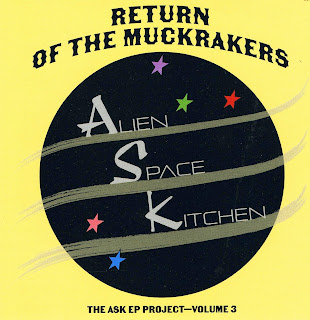 Like the other ASK EPs, Muckrakers is short but packed with musical goodies.

The first track that really grabbed me here is “This Will Take Time,” one of the group’s trademark cheerful doomsday ditties. This one features the refrain, “The world is in denial/We’re in a downward spiral/We’re dancin’ with the Devil every day …”

While several songs have underlying political messages, “Police Brutality” is a bonafide protest song. “Police brutality every day/What the hell’s going on in the USA?”

The warning here, in an age where the president is looking more and more like a cult leader, is to not drink the Flavor Aid. (And yes, Vaughter got the correct brand name of the last-call-at-Jonestown drink.) “We’ve got to take a crazy stand before they kill us all/Jim Jones is still among us, his writing’s on the wall,” he sings.

Here’s a quibble: I know what he’s trying to say, but wasn’t “They’re going to kill us! … We’ve got to make a stand” basically what Jim Jones was babbling about as his followers were collapsing around him?

I’m not sure why Alien Space Kitchen chose to do a series of EPs instead of a regular-length album. But having listened to three of them so far, I believe the format works.

I remember the Golden Age of CDs (which preceded The Golden Age of Climate Change by a few decades) when many artists felt obligated to practically fill up each compact disc so it seemed like every album was at least an hour long. Few albums warranted that.

In contrast, the ASK EPs range from 18 to 26 minutes each and, to borrow the title of an old Jerry Lee Lewis box set, they’re all killer, no filler.

In a recent radio interview, Vaughter and Graney said they actually have two more EPs in the can, and Volume 4, which they say will have a completely different sound, will be unleashed late this year or early next. I’m already looking forward. 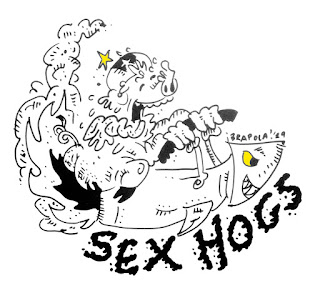 * Ride the Tusk by Sex Hogs II. Here’s another EP (five songs, just under 13 minutes) by another garagey/punky trio with roots in this enchanted land. Drummer Nate Daly — I guess you’d call him the boss Hog — played in an Albuquerque band called The Scrams until a few years ago when he scrammed off to Chico, California.

The music is tight, punchy, and pretty melodic. There is plenty of acoustic guitar, played by “Guitar Hog” ( Johnny Meehan).

The finest moment on the whole album has to be Meehan’s crazy, shredding guitar solo on the song “No Blame.” But coming close to that is the crazy, shredding — and all-too-brief — harmonica solo (by I don’t know which Hog) on the final song, “Bricks.”

Both Sex Hogs II and Alien Space Kitchen sell their music, including all the titles mentioned here, through Bandcamp.com. Go buy their stuff.

I couldn't find any videos for Sex Hogs II, but here's Alien Space Kitchen performing "Give Punk a Chance" at a recent Santa Fe show

Here's one of my favorites from Return of the Muckrakers