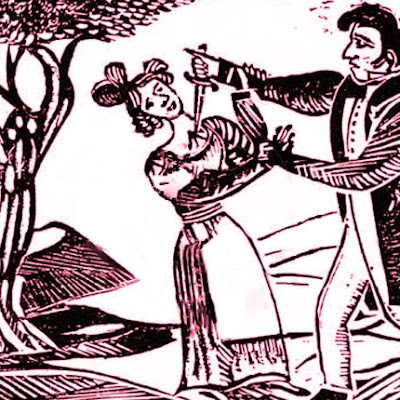 As any lover of American and British folk ballads know, murder ballads are an essential part of our heritage -- especially those songs about young women who fall for, and eventually are felled by a violent dickhead lover.

And as lovers of '50s and '60s rock and country know, answer songs, if not essential, can be a lot of fun, from Etta James' "Roll With Me Henry" (an "answer" to "Work With Me Annie") to "Dawn of Correction," (a response by a group called The Spokesmen to "Eve of Destruction.")

As I wrote on this blog a few years ago:

There are some truly important artists who sang answer songs -- Etta James and Kitty Wells, to name a couple. But there is something so inherently tacky, so nakedly bottom-feederish about the whole game of trying to glom onto someone else's hit, I can't help but love the answer-song.

And yes, gentle readers, there are examples of answer songs to murder ballads.

Let's look first at a ballad ballad that was based on the true story of a Tennessee man named Finley Preston who killed his lover, Lillie Shaw and burned her body in 1903. Preston was hung for the crime in 1905.

The murder turned into a ballad known by several names including "Come All Ye Coal Miners," "Lilli Schull" and "Finley Preston." This is the title used by Clint Howard and Fred Price in this 1972 recording.

The great alt-country band, Uncle Tupelo recorded a version called "Lilli Schull" on their live album,  March 16-20, 1992. Later in the '90s, after Uncle Tupelo broke up, singer Jay Farrer, with a new band, Son Volt, recorded this answer song called "Been Set Free," which begins,  "I am the voice of Lilli Schull ..."

Another classic murder ballad is "Down in the Willow Garden," which deals with the murder of a woman named Rose Connelly. It's an Appalachian ballad with roots in Ireland. Here's the version by The Everly Brothers:

In 2011, Rachel Brooke released an answer song on her album "Down in the Barnyard." Here Rose's childhood friend sees justice done.

Perhaps the best-known murder ballad is "Pretty Polly." Question: How many bluegrass bands or alt-country bands does it take to play "Pretty Polly"? Answer: Apparently all of them.

Here's the version by The Stanley Brothers:

Technically this 2011 song, "Pretty Polly's Revenge" by Florida singer Fred "Butch" Burns, isn't technically an answer song. It's a re-write of the original. But here, let's just say the scoundrel Willie makes the mistake of bringing a knife to a gunfight.