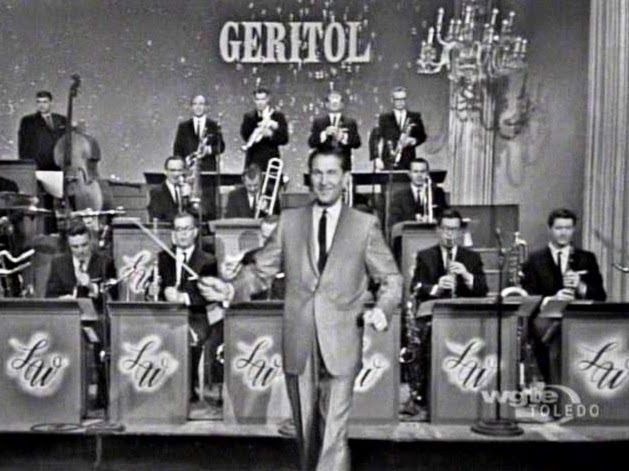 Here's a bit of the North Dakota-born Welk's bio from History.com:

Welk’s parents were immigrants from Alsace-Lorraine who spoke only German to the nine children they raised on their farm outside Strasburg, North Dakota. In fact, Lawrence Welk did not learn English until his early 20s, which explains the accent that became his trademark. A dutiful son, Welk dropped out of school in the fourth grade to work full time on the family farm, but he decided early on that he wished to pursue a career in music. He learned to play the accordion from his father, who carried his own antique instrument with him when he immigrated to America. Lawrence wore out the inexpensive, mail-order accordion bought for him as a boy, so he made a deal with his parents: In exchange for a $400 loan to purchase a professional accordion, he would stay and work on the family farm through the age of 21. Playing small professional gigs in the surrounding area, Welk honed his musical skills and earned enough money to pay his parents back when he left home for good in 1924. 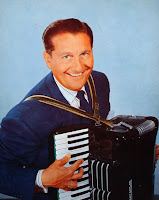 By the early 1930s, Lawrence Welk had earned a degree in music and made a name for himself as the leader of a traveling orchestra. He had also failed in a restaurant venture selling “squeezeburgers” cooked on an accordion-shaped grill, but he had succeeded in developing a unique brand as the proponent of a pleasing pop style dubbed “Champagne Music” for its light and bubbly quality.

Welk moved to Los Angeles in the early 1950s. He got his own local tv show, which was picked up by ABC in 1955. After being cruelly dropped in 1971, Welk got a syndication deal, which last until 1982.

I've hears lots of folks from My Generation say their grandparents made them watch the Welk show. I guess I lucked out. My grandfather, born the same year as Welk, didn't seem to have any interest in the bubble-laden show. And my grandmother, born a few years later, thought Welk was an old cornball.

But to celebrate his birthday, here are some special memories courtesy of YouTube:

Here's one from Welk's brief hippie period. (Rumors that the bandleader had contacts among the Manson Family are completely false and should not be repeated.

In addition to his musical skills, Lawrence was quite the polka dancer:

Here's a clip featuring several of Welk's female singer regulars. Caution: My sources in the Drug Culture community warn that it's NOT SAFE to view when you're stoned!

Speaking of stoned, this clip of a "modern spiritual" seems to pop up on social media every few weeks for the past several years. I actually blogged about it myself back in 2008. While then Vice President Spiro T. Agnew was blasting this song as subversive propaganda for illegal and dangerous marijuana, Welk singers Gail Farrell and Dick Dale (no, not THAT Dick Dale) performed this Brewer & Shipley the tune on Lawrence's show.

Some 45 years later, Brewer & Shipley met and had dinner with Farrell and her husband and apparently had a wunnerful time.