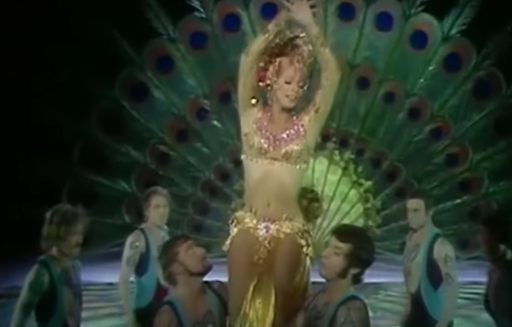 The Beatles broke up in 1970. And yet their music lived on. Why weren't they forgotten by the masses like The Dave Clark 5 or Gerry & The Pacemakers?

The answer is obvious: The stars of 1970s TV variety shows made a bold effort throughout the Me Decade to make sure Beatles songs would be remembered through time.

The Beatles may have been over and done as a band, but the tacky variety shows, which were on the rise, threw their music a necessary lifeline.

Old school variety show host Ed Sullivan might have helped launch The Beatles in 1964. But Donny & Marie and their contemporaries helped preserve the Fab 4's legacy.

Actually, even before the '70s, some variety programs displayed a sincere affinity for The Beatles' music.

For instance, this 1967 clip from the Carol Burnett Show, starring Carol along with Phyllis Diller, Gwen Verdon (best known as a dancer), and Bobbie Gentry -- all of whom grew mustaches for the occasion --  might have been the template for the variety shows that followed.

On one hand, how cool was it, seeing Bobbie Gentry and Phyllis Diller in the same "band"? On the other hand, this reinforces a line in The Dictators' song "Who Will Save Rock 'n' Roll":

"I wish Sgt. Pepper had never taught the band to play."

Skip ahead to 1975 and here's Cher, on her popular television program, singing a Beatles medley with Tina Turner and ... Kate Smith???????

And in 1978, Donnie & Marie were joined by none other than Kris Kristofferson for another rollicking Beatles medley.

But as far as I'm concerned, the best variety-show Beatles song was the 1970 appearance by the beautiful Juliet Prowse (hey, this lady dated both Sinatra and Elvis). She did a crazy Bollywood-style "Tomorrow Never Knows" -- one of my favorite Beatles tunes, that rarely gets covered -- on The Engelbert Humperdinck Show.

And if you enjoyed this post, check out the crazy Beatles covers HERE and HERE