AS LONG AS THEY DON'T ARREST FAKE OZZIE

LOS ANGELES (AP) - Elmo, the red and cuddly Muppet from the Sesame Street television series, has learned a new lesson: 'H' is for handcuffs.

A man dressed as the character was one of three impersonators arrested last week for allegedly harassing tourists for tips after posing for photos on Hollywood Boulevard. Booked with him were people impersonating superhero Mr. Incredible and the dark-hooded character from the horror movie "Scream." The impersonators said they were taken into custody at gunpoint, handcuffed and paraded on the Hollywood Walk of Fame before stunned tourists and other impersonators. They were charged with misdemeanor "aggressive begging," police said.

"With all of the crime in Los Angeles they pick on us?" said Elmo impersonator Donn Harper, 45, who makes up to $400 a day in tips. 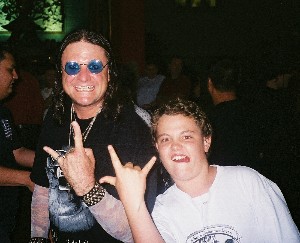 (Anton with Ozzie impersonator near Grauman's Chinese Theater last August. Darth Maul, above, hissed at me when I didn't tip him.)
at October 25, 2005