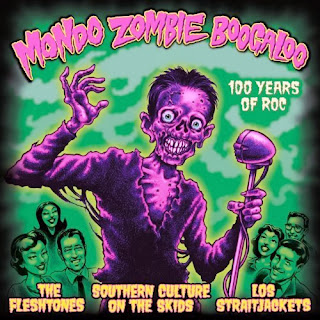 The holiday season is upon us, the time for trick-or-treating, bobbing for apples with razor blades and communicating with the spirits of the dead. And for listening to deliciously tacky rock 'n' roll like that found on Mondo Zombie Boogaloo.

This definitive Halloween collection of the year features the work of my three favorite bands on North Carolina's Yep Roc label, The Fleshtones, a New York garage band that’s been around since the ‘70s; Southern Culture on the Skids, a North Carolina trio that specializes in a raw Dixie-fried mix of rockabilly, swamp rock, country and surf music in songs about fried chicken, stock-car races and cheap liquor;  and Los Straitjackets, an instrumental band known for wearing masks (Mexican wrestling masks) even when it’s not Halloween.

It's just what the (mad) doctor ordered. The album even has an cover by Steve Blickenstaff, best known. for creating the groovy ghoulie cover of The Cramps’ 1984 album Bad Music for Bad People, as well as doing the art for last year's GaragePunk Hideout Halloween compilation, Garage Monsters.

The good news is that the three Mondo Zombie bands are touring together. The bad news is that they aren't playing anywhere near Santa Fe, so this album will have to suffice for those of us in the rock 'n' roll hinterlands. 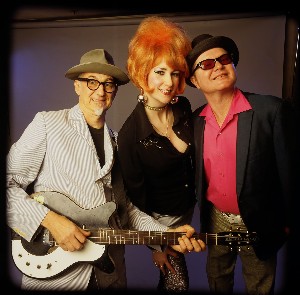 Yes, I do love all three of these bands, and all of them make worthy contributions to this compilation. But I have to say the best songs here are by Southern Culture on the Skids. I never knew until a couple of years ago, when they released a ready-for-Halloween album called Zombified, how fond SCOTS is of monster songs. The five new tracks of theirs on Mondo Zombie Boogaloo are swampy, twangy treasures. These include a cover of "Goo Goo Muck," a song made famous by The Cramps, but originally done by Ronnie Cook & The Gaylads. Mary Huff of Southern Culture sings it sexy.

They also do a western-flavored tune called "The Loneliest Ghost in Town," as well as "Demon Death," which starts out with a squall of feedback before settling into a Deadbolt-style doom-swamp groove, with Rick Miller speaking nearly all the lyrics.

But my favorite Southern Culture tune here is "Tingler Blues," which starts out with an audio clip from The Tingler, a 1959 Vincent Price movie best known for its promotional gimmick of installing vibrating devices in theater seats that simulating “tingling” in the scary parts of the movie. SCOTS’ Rick Miller sings in his lowest register: “I’ve got a monster living inside of me / It’s a killer and it won’t let me be …”

The least valuable SCOTS number here is an instrumental called "La Marcha De Los Cabarones." It's not bad, but when you're sharing an album with Los Straitjackets, you probably ought to leave the instrumentals to them. 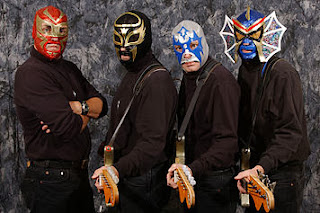 And indeed, the musical luchadors from Memphis have some dandy instrumentals on Mondo Zombie Boogaloo. Most are theme songs from films like “Halloween,” “Young Frankenstein,” (a beautiful, almost Latin-sounding melody on that one) and, yes, “Ghostbusters.”

But even better is “It’s Monster Surfing Time,” a cover of a song by The Deadly Ones, a surf band from the ‘60s led by Joe South, (who later found fame writing songs like “The Games People Play” and “I Never Promised You a Rose Garden.”)

Unfortunately, The Fleshtones is the least utilized of the three bands here. While the other two groups each have five tracks of their own on this album, The Fleshtones only have four. And one of those, “Ghoulman Confidential,” (which sounds like a crazy mash-up of “Short Shorts” and the Batman theme) was on a previous Yep Roc Halloween sampler, Rockin’ Bones, several years ago. 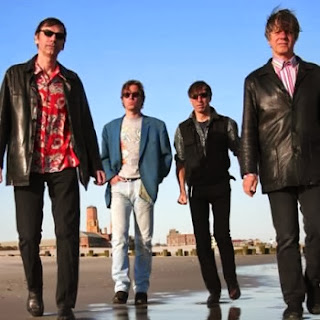 But the contributions of The Fleshtones are essential to the album especially “Sock It To Me Baby (in the House of Shock),” a silly ‘60s monster song originally done by a band called The Animated Sounds and “Haunted Hipster,” a Fleshtones original, which is a back-handed ode to the universally loathed modern-day hipster (“You think you’re cool, but you are dead too …”)

All three bands contribute to “Que Monstruos Son,” a Spanish version of “The Monster Mash” with The Fleshtone’s Keith Streng providing the Bobby “Boris” Picket imitation.

Like the vampires and zombies who haunt this album, Halloween spook rock cannot die. Long may it rattle your bones.

* Merles Just Want to Have Fun by Bryan & The Haggards featuring Eugene Chadbourne. I wouldn’t be surprised if a lot of Merle Haggard fans listening to this album went away thinking that these guys were making fun of ol’ Hag considering some of the off-key horns and Bizzaro World solos that color this album.

But I don’t think that’s the case. Chadbourne, an avant garde guitarist, and sax maniac Bryan Murray indeed are having a lot of fun with the material – primarily Haggard songs and a medley of Bob Wills songs that Merle has covered, but they’re not making fun. But even though Hag didn’t do it this a way, this is a true tribute done with love in the heart. 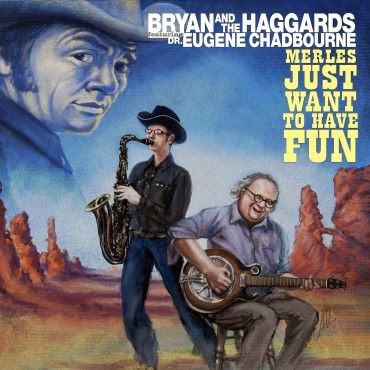 Neither Chadbourne and Murray are country musicians, but both love country music – even though in their hands the music gets mutated into something new.

The first time I ever heard Chadbourne on the radio, she was doing a crazy Johnny Paycheck medley. As for Murray, this ain’t his first Merle rodeo. Bryan & The Haggards have a couple of previous albums filled with songs by their namesake.

On the opening cut, “The Fightin’ Side of Me,” one of Haggard’s most belligerent numbers is turned into what sounds like a drunken polka (Chadbourne begins the second verse, “I read about some squirrelly guy …”  then abruptly changes the lyrics: “That’s me! I don’t believe in fightin’ …” Soon the tune melts down into  jazz cacophony. Then there’s “The Old Man from the Mountain,” which Chadbourne and crew do as an insane rocker.

Other highlights include the aforementioned Bob Wills medley and “Listening to Wind,” which retains the song’s lovely melody even with the off-kilter jazz embellishments. And while the album starts with “The Fightin’ Side of Me,” it ends with “That’s the News,” a relatively recent Haggard song, in which the Okie from Muskogee had begun to question the endless wars of the 21st Century.

* Haunted podcast: Just in time for your Halloween party comes the sixth annual Big Enchilada Spooktacular. It's already terrifying people all over the internet.

(This Los Straitjackets song's not actually on the Mondo Zombies album, but who cares?)