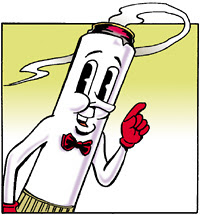 I don't smoke cigarettes and I never did.

But in the days before smoking bans, cigarettes -- made their smokey mark on various strands of American popular song.

Country singers poke fun at their addictive qualities. Sometimes their used as a metaphor of loneliness or a symptom of an empty, sinful life.

Listen to all of these tunes and you'll be coughing and hacking by the end of this blog post.

First let's start with the song that inspired this week's theme. A couple of weeks ago my old pal Mark asked me if I remembered a song that referred to a cigarette as something that had "fire on one end a fool on the other." I didn't recall this but went searching through cig songs to try to find it. Mark found it before I did, a novelty tune called "Cigareets & Whuskey and Wild, Wild Women." Mark found a good version by Ramblin; Jack Elliott. But I decided to use this goofy one by a group called Red Ingle & The Natural Seven. I never realized before that The Hombres lifted Ingle's introduction for the introduction to their own 1967 hit "Let It Out (Let it All Hang Out)."

One of the most famous country tunes about cigarettes was this talking song by Tex Williams, which he co-wrote with Merle Travis -- "Smoke, Smoke, Smoke That Cigarette."

Here's a sad and sultry one called "Three Cigarettes in an Ashtray" by Patsy Cline.

Tiny Tim (you've read about him recently) reached back to 1898 to find a song defending nicotine addiction with "Sly Cigarette," performed here with Brave Combo.

Speaking of sly, Robbie Fulks paid tribute to his boyhood home, the great state of North Carolina in his song, "Cigarette State."

I'm not sure where Ry Cooder found "Fool for a Cigarette," but it appeared on his album Paradise and Lunch as a medley with J.B. Lenoir's "Feelin' Good."

If  "Cigarettes and Coffee" were what powered Otis Redding, then they should be mandatory.