A version of this was published in The Santa Fe New Mexican
September 25, 2015 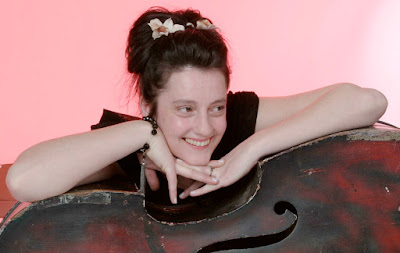 The original Holly Golightly was created by Truman Capote. She was the protagonist of his 1958 novel Breakfast at Tiffany’s. Capote described her as “an American geisha.”

But the Holly Golightly I’m writing about is neither a geisha nor an American — though for the past several years she’s been living in the U.S. of A. This Holly Golightly is a singer who comes from England. And, yes, that is her real name, at least two-thirds of her real name. She was born Holly Golightly Smith in 1966. Her mother reportedly was reading Breakfast at Tiffany’s around the time of Holly’s birth and liked the name.

This Holly Golightly happens to be one of the most underrated rock ’n’ roll singers currently plying the trade. And she’s got not one but two new albums – Slowtown Now!, a solo album, and Coulda Shoulda Woulda, under the banner of Holly Golightly & The Brokeoffs. Both are solid musical delights full of tasty tunes and Golightly’s wicked wit and attitude.

A little Holly history: In the early ’90s, Golightly’s boyfriend was the drummer of Thee Headcoats, which was the musical vehicle of British garage poet/rock crank Billy Childish. She became an original member of Thee Headcoatees, a garage-rock girl group originally formed to back the boys, but which grew into a force of its own, recording several albums full of spunk and fire.

Golightly remained a member of the band until around 1999. But a few years before that, she started recording her own solo albums. Golightly moved to the U.S. not long after she shifted musical gears in 2007 and began recording bare-boned funky-clunky country bluesy records with her partner “Lawyer Dave” Drake under the name Holly Golightly & The Brokeoffs. While a few steps removed from Thee Headcoatees’ garage sound, those rootsy albums represent some of her finest work. All of her albums since then have been Brokeoffs albums, until Slowtown Now! 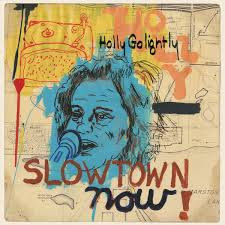 For Slowtown, her first solo album in 11 years, Golightly went back to London to record. And she recorded it for her old label Damaged Goods (which has released a major chunk of Childish’s catalog) with an actual band assembled for the album, featuring a couple of guitarists, a drummer, and a standup bassist. The overall sound draws from the various influences that have propelled Golightly — rockabilly, ’60s girl-group sounds, blues, smoky jazz, and more.

It starts off with a slow-burning swamp-a-billy tune called “Seven Wonders” with a seductive voodoo beat and sweet, grating guitar. This is followed by “Fool Fool Fool (Look in the Mirror),” featuring a retro fuzz-guitar hook. The only tune here that’s not a Golightly original, this song was done in the mid-’60s by a Chicago soul singer named Barbara Acklin (who probably is best known for co-writing The Chi-Lite’s hit “Have You Seen Her”). With its soft trombone and sexy, understated vocals by Golightly, “Frozen in Time” could almost pass as an old Burt Bacharach production, something you might hear in an Austin Powers movie soundtrack.

Golightly hasn’t forgotten how to rock. The sassy “As You Go Down” (featuring some fine bass from Matt Radford) is rooted in rockabilly and, of all the songs here, probably sounds closest to her pre-Brokeoffs albums. That’s followed by the downright garagey “You Stopped My Heart” with some more snazzy fuzztone guitar. “Forevermore” reminded me of the recent Deke Dickerson/Los Straitjackets collaboration (Deke Dickerson Sings the Great Instrumental Hits) because the melody is so similar to the old surf hit “Apache.”

While there is so much to admire on Slowtown Now!, both in the performance and the production, between Golighty’s new albums, I have to say I like the raucous new Brokeoffs’ effort the best. 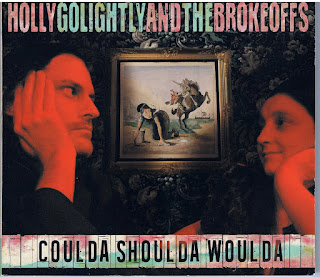 Coulda Shoulda Woulda, which is scheduled for release on Oct. 16, is a big sloppy homemade American mess. Of course, I mean that in the best possible way. From the opening cut, “Heaven Buy and Buy,” a rocking faux-gospel indictment of religious hypocrisy (including an invitation to the devil to perform an obscene act), this album is packed with crazy fun.

The rootsy tango “Apartment 34” is a character sketch of some bad white-trash neighbors who “do their cooking in the bathtub” and have a thing for old Camaros; “Lonesome Grave” is a spooky, fire-and-brimstone fiddle-and-banjo workout; “Little Mule” has some nice nasty guitar hooks; “Karate” is a funky dance song, though fans of Thee Headcoatees will surely see the link to “My Boyfriend’s Learning Karate”; and “Jump in the River” is Lawyer Dave’s big moment, taking Leadbelly’s great notion and turning it into a sardonic declaration of salvation.

Holly and Dave always come up with great cockeyed cover songs. Their best remains Mac Davis’ “Hard to Be Humble” (from their 2012 album Sunday Run Me Over). But in the same demented stratosphere is this album’s “Marijuana, the Devil’s Flower,” a vintage country-western anti-drug song by someone called Mr. Sunshine. The chorus goes “Marijuana, the devil’s flower, if you use it, You’ll be a slave/Marijuana’s gonna bring you sorrow/It will send you to your grave.”

(By the way, there were at least two country songs with a similar title. Another, which I found on a volume of the fabulous Twisted Tales From the Vinyl Wastelands series, was “Marijuana, the Devil Flower” by a Johnny Cash copycat named Johnny Price.)

Coulda Shoulda Woulda ends with a Christmas song — actually, an anti-Christmas song — called “Christmas Is a Lie.” This won’t be played at any big stores while you do your Yuletide shopping. But it would be cool if it were.

God bless us every one, Holly Golightly!

Here's an official one from Slowtown Now!