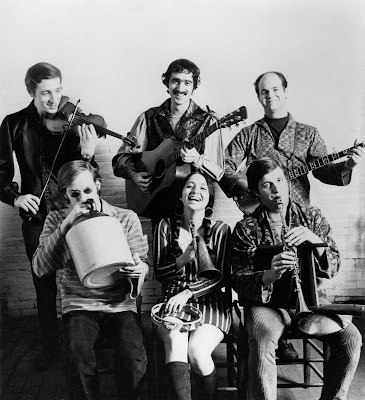 The recent death of Dan Hicks got me thinking of one of Hicks' big influences, Jim Kweskin.

I was in junior high the first timeThe Jonathan Winters Show, which I never missed. This was about the same time I'd become a devotee of Dr. West's Medicine Show & Junk Band and the early Nitty Gritty Dirt Band, so discovering Kweskin was a huge revelation. I don't even remember the songs Kweskin played on Winters that night. I just remember their joyful noise -- and how sexy singer Maria D'Amato was.
I ever saw the Jim Kweskin Jug Band. It was on

The music of Kweskin and his band -- which included Maria's then husband Geoff Muldaur, Fritz Richmond, Bill Keith and harmonica blower/cult leader Mel Lyman --  was a personal gateway to all sorts of old blues, jazz, hillbilly, Tin Pan Alley and, yes, jug band sounds. They showed that music that even predated my grandparents could still be wild, mysterious, and a lot of fun.

I've already done entire features on some Kweskin favorites such as Beedle Um Bum and Sheik of Araby. But here are some other original, or at least earlier versions of songs from the Kweskin song bag.

Let's start off with a jug-band tune from The Dixieland Jug Blowers, with a song Kweskin would use as a title song for his 1967 album, Garden of Joy.

Here's a version of "Never Swat a Fly" recorded by Abe Lyman's California Ambassador Hotel Orchestra more than 30 years before Kweskin and crew.


Another exotic tune, "Borneo," performed by the Frank Trumbauer Orchestra with Scrappy Lambert on vocals.

I heard "Blues in the Bottle done by The Lovin' Spoonful before I heard Kweskin's version. But Prince Albert Hunt's Texas Ramblers did it before either of them. (And Hunt was from Terrell, Texas!)


Finally, here's one for Dan Hicks.