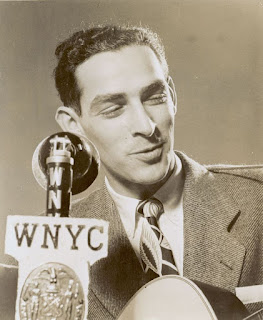 Oscar Brand died of pneumonia Friday, Sept. 30 at the age of 96 at his home in Greatneck, N.Y..

He was a singer, recording artist. He composed scores for Broadway musicals and documentaries and even tried his hand at TV

But as Douglas Martin wrote in his obit in  New York Times, Brand was best known for his radio show, “Folksong Festival,”

Seventy years! His last show aired less than a week before he died, the Times said.

And like the best radio DJs, he was a volunteer. He did it for his love of his music and never got paid a nickel for his WNYC shows.

Although Brand never was a member of the Communist Party, during the McCarthy era, he was labeled as a communist sympathizer whose radio program was a "pipeline of communism" because he frequently invited blacklisted performers like Pete Seeger to appear on Folksong Festival

According to Martin's obit:

He invited Burl Ives, too, even though he had alienated many of his fellow folk singers by naming names to the House committee. The singer Dave Van Ronk, in his autobiography, The Mayor of MacDougal Street (2005), recalled taking Mr. Brand to task for this, only to be told, `Dave, we on the left do not blacklist'— a response that, Mr. Van Ronk recalled, `put me right in my place.'

Here's a few videos to pay tribute to Oscar Brand.

Let's start with a dirty one

Brand, who was in the Army during World War II, was a collector of songs sung by soldiers, sailors and Marines. In the late '50s, inspired by a collection of Air Force songs collected by a pilot named William Starr, Brand recorded an album called The Wild Blue Yonder, which included this next tune, "Save a Fighter Pilot's Ass."

Brand recorded an entire album of campaign songs for every president between George Washington and Bill Clinton. This is one of my favorites.

Finally, here's a clip with Brand's 1961 "Folksong Festival" interview with a young Bob Dylan. Here, the future Nobel Prize winner speaks of his (imaginary) boyhood in Gallup. N.M. and his (imaginary) travels with carnivals.