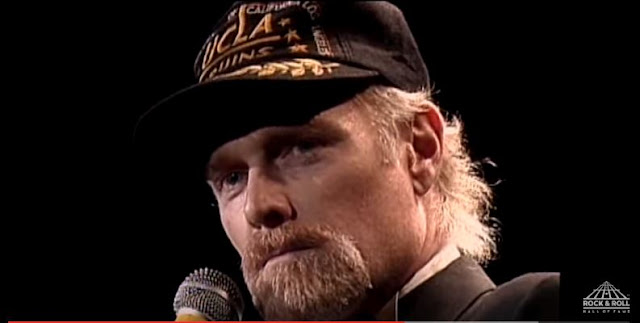 Allow me to get a little self-indulgent on this Wacky Wednesday.

I have to give a speech in Albuquerque today. I won an award from the New Mexico Foundation for Open Government. It's the first time in awhile that I've had to give an actual speech, so I thought I'd study some classic oratory from the world of rock 'n' roll.

The first example that came to mind was the short but strange speech by Bob Dylan when he won the Lifetime Achievement Award at the 1991 Grammy Awards. Jack Nicholson introduced him.

Then there was Mike Love's inspirational words when The Beach Boys were inducted into The Rock 'n' Roll Hall of Fame in 1988. After talking about the beauty of harmony, he rips into Paul McCartney, Mick Jagger, Diana Ross and Bruce Springsteen. Love later explained that he hadn't meditated that morning (His section starts at the 3:50 mark.)

I actually do admire the following speech by Frank Zappa. It wasn't an awards show -- it was a Congressional hearing on the dangers of dirty lyrics in rock songs. Frank stood up for liberty and against the "sinister kind of toilet training program" being advocated by Tipper Gore and her minions.

(If you want to see the rest of Zappa's testimony -- with questions from hostile senators -- Part 2 can be found HERE , Part 3 HERE and Part 4 HERE)