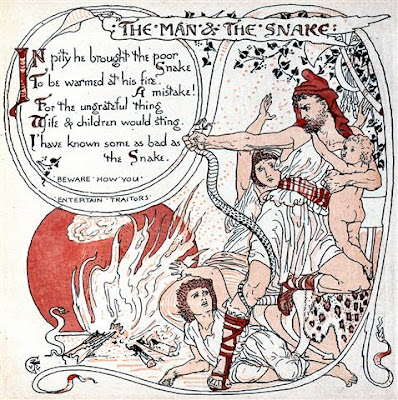 This weekend, on the heels of the release of the infamous Donald Trump "hot mic" tape in which he brags about being able to kiss and grope women without their consent because he was “a star," another Trump video begin popping up on Twitter. These were videos from earlier this year in which the Republican nominee reads a poem about a "tender woman" who shows mercy to reptile who seems to be in pretty bad shape.

Here is one of those speeches. (Note: The original Yotube I posted was taken down. I'm replacing it with one that CBS News posted in April 2017.)

As interpreted by Trump, the snake is a metaphor for Syrian terrorists and the "tender woman" are the foolish liberals who "would take them in."

But the people posting the video over the weekend were doing so to taunt Republicans who were practically tripping all over themselves trying to flee from Trump. Their message: They knew damn well what this guy was before they took him in.

Though Trump has repeatedly -- and incorrectly -- identified the writer as Al Wilson (a soul singer who covered it in 1968), the lyrics he's reading are a variation of a song written in the early '60s by jazz singer Oscar Brown, Jr. that was based on one of Aesop's fables.

The arrangement for Al Wilson's version of Brown's song sounds a whole lot like the one Johnny Rivers recorded a couple of years before that on his 1966 album, And I Know You Wanna Dance.

Johnny's was the first version I ever heard, so I've got a soft spot for it. Here's a live version

And here is a fairly recent one by French rocker, Rev. Tom  Frost from his 2013 album, Bloody Works. I'm pretty sure that Debra Paget, the dancer in this video never went furniture shopping with Trump.