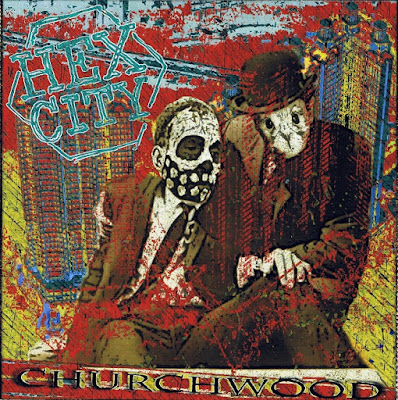 In the not-so-distant past, every now and then I would encounter a special sort of reader who seemed to love to play what I call “stump the critic.” This is the sort of guy — and it would always be a guy — who would go down some list in his head of obscure bands and singers until he got to ones to which I wasn’t hip.

These days I wouldn’t last long in such a game. It’s true that I don’t like a large percentage of the new crap that’s out there. But it’s also possible that there’s another factor at work. Maybe I’ve become more musically conservative in my advanced years and more cynical about what constitutes musical innovation.

But one thing I can say for myself: I was a fan of Churchwood before most people outside of Austin, which means I’m far cooler than most of those “stump the critic” twits. And Churchwood, as they prove once again with their recently released fourth album, Hex City, is a band that all true rock ’n’ roll fans should seek out.

Churchwood is fronted by singer Joe Doerr, an English professor by day, and guitarist Bill Anderson, who I only recently realized used to play with the acoustic country/punk group The Meat Purveyors, who were always one of the highlights of Bloodshot Records’ annual South by Southwest party at the Yard Dog Art Gallery. Anderson and Doerr have been co-conspirators for decades in various Austin bands.

Some critics — and in fact their own record company, Saustex — have called them an avant-garde blues band. There’s a lot of truth in that. You can certainly hear the influence of Captain Beefheart — who put the sounds of Howlin’ Wolf through a Dadaist meat grinder — in Churchwood’s musical magic.

But the band goes well beyond the Captain’s brand of blues. You also can hear echoes of Beefheart’s pal Frank Zappa in Churchwood’s knack for suddenly changing time signatures in the middle of a song. I’ve compared them to Pere Ubu.

And a current weird musical fantasy of mine is producing a split album that would have Churchwood doing songs by The Fall on one side and The Fall covering Churchwood tunes on the other.

On this album, the band’s basic lineup — which includes guitarist Billysteve Korpi, Adam Kahan on bass, and drummer Julien Peterson — is fortified on some songs by a horn section (The Money Shot Brass) and a pair of female vocalists called The Nicotine Choir.

Every track is filled with incredible blues, funk, and sometimes even metal riffs, as if the Dap-Kings were in a vicious battle with the Butthole Surfers while Doerr plays the role of oracle, unleashing barrages of verse.

By the title, you might suspect “One Big White Nightmare” is about the 2016 election. But what I hear is Doerr standing on the sidelines of some pending apocalypse laughing insanely while shooting arrows of flaming literary imagery: “Haiku: seventeen syllables/frame about a doubt with a grim conclusion/yahoo: all the Houyhnhnms in the world/are getting rounded and ridden into mass delusion …”

(Houyhnhnms? That should get a Swift response.)

Desperately fleeing from some crazy unnamed trouble is a theme that runs through more than one song on Hex City. On the low and slow “Hallelujah” (no, not the song by Leonard Cohen, peace be upon him), Doerr sings, “Yeah, we slithered out of Dodge in a ’60 El Camino/and we parked beneath a sycamore tree/the radio was playing ‘Found My Love in Portofino’ when you entered all the terms of my plea. …”

A few songs later, on “Chickasaw Fire,” he rapidly recites, “payin’ no attention ’cause I’m jailhouse broke/I drive a stolen Cadillac and into the smoke/of a Chickasaw fire. …”

Hex City itself is a dangerous adventure. And the adventure only deepens with every listen. 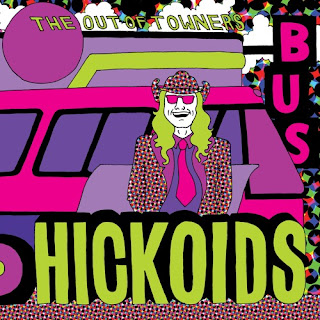 * The Out of Towners by Hickoids. This is a bittersweet EP by these venerated Austin cowpunks and Saustex Records flagship band. It’s a happy occasion because this is the first Hickoids release since 2013’s Hairy Chafin’ Ape Suit. But it’s also sad because the six tracks on this CD are the last recordings by the late Davy Jones, the lanky goofball guitarist known for his sweet smile, tacky plaid suits, colorful paint-flecked boots, and cowboy hats.

Jones -- a founding Hickoids member along with Saustex commander Jeff Smith -- died of lung cancer a year ago. In fact, this column is being published on Nov. 25, the first anniversary of Davy’s death.

The Out of Towners is a collection of covers of songs written by some of the band’s favorite songwriters from Texas. It kicks off with a sweet-sounding version of “I Have Always Been Here Before” by the Lone Star State’s favorite psychedelic ranger, Roky Erickson, and includes a blistering take on Willie Nelson’s hit “Night Life” and a more reverent cover of Doug Sahm’s “At the Crossroads,” a song best known for the line “you just can’t live in Texas if you ain’t got a whole lot of soul.”

There’s a slow, soulful song by Santa Fe resident Terry Allen called “I Just Left Myself Today,” (“I didn’t float, I didn’t fly, I did not transcend. No I just walked out on me again”) from his classic Lubbock on Everything album. And there’s “Dead in a Motel Room,” a dark rocker by the Dicks, an old Austin punk rock band that included Jones. This one has a harmonica solo by Walter Daniels of Big Foot Chester and Meet Your Death.

One of my favorite tunes here is “Cans,” which was written by Rich Minus, who is better known for writing “Laredo Rose,” which was recorded by the Texas Tornados. Minus died earlier this year at the age of seventy-five. “Cans” is the story of a homeless man. I don’t think this band has ever sounded prettier.

Here are some Videos for yas

First some Churchwood. I found some from their recent CD release party at the Hole in the Wall in Austin.

And here is America's beloved Hickoids. Smitty is woefully under-miked here, but this clip captures a big chunk of the Hickoids spirit.


And here's an old favorite tune recorded at the Davy Jones memorial in April.