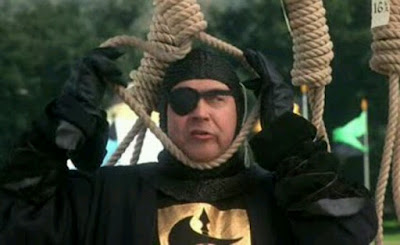 A strange character introduces himself: "They call me Hanging Johnny ... But I never hung nobody ..."

But after that little disclaimer Johnny begins bragging about all the people he has hanged. His mother, his brother, his sister Nancy, a robber, a police officer, a friar, his own mates and skippers ..." Different versions include different victims.

It's no wonder this morbid little sea chanty delights me so.

Indeed, "Hanging Johnny" is a classic sea chanty. It's a halyard chanty, a call and response sung by crew members engaged in a long, tedious task like setting the sails on a ship.

According to the liner notes of a 1967 EP titled Chicken on a Raft by a folk group called The Young Tradition:

"Hanging Johnny" is a good example of a shanty that was ready made for stringing out, a trick used by the shantyman for lengthening a song to suit the job in hand. Anyone could be a candidate for Hanging Johnny's rope until he had enough verses to finish the job.

On her folk ballad site The Contemplator, Lesley Nelson-Burns writes:

There is speculation that "Hanging Johnny" may refer to the eighteenth century hangman, Jack Ketch. In fact "Jack Ketch" was a term used to refer to all hangman, named after a Jack Ketch who was the executioner at Tyburn from 1663-1686.

However, a web page about "Hanging Johnny" in the Traditional Ballad Index on the California State University, Fresno website says:

According to most sources, the "hanging" in this song does not refer to execution. Great Lakes sailor Carl Joys said it referred to the young sailors who went aloft to swing out the halyards when a sail was hoisted. Another account says it referred to a sailor who held a rope lashed to other sailors. If this "hanger" let them go in a bad sea, they would be washed overboard and lost.

I guess that would explain Johnny's claim that he never hung nobody.

Part of "Hanging Johnny" was featured in a scene from the 1962 movie version of Herman Melville's Billy Budd. (UPDATE 6-18-20: I had a clip of the song from the movie, but it's no longer on YouTube. If it somejhow reappers, please let me know!)

But my favorite is a more recent take on "Hanging Johnny" by Stan Ridgway, which appeared on Hal Wilner's 2006 various artist compilation Rogue's Gallery.