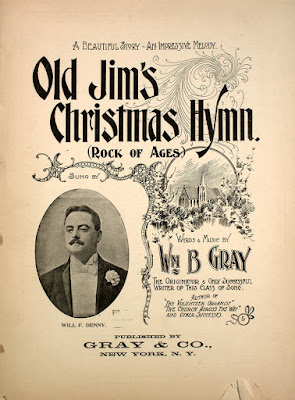 A couple or three years ago I was at KSFR doing what was then my annual Christmas Special -- I'd been doing it for probably more than 15 years by then -- when a weird revelation came over me and chilled me to the bone.

Even the parodies, the punk-rock versions and the anti-Christmas novelties started rubbing me the wrong way.

That's one reason that I decided to break tradition this year and not do a Christmas show for the Big Enchilada Podcast. Instead I did THIS.

The trouble with most Christmas songs is that everyone has heard them so many times you just want to scream.

At least I do.

Hopefully by next year I'll be sick of being sick of Christmas music and get back into the spirit instead of acting like a sour old bastard.

So for this Throwback Thursday before Christmas, here are a few old old songs, some from the dawn of the recording industry, that hopefully nobody is sick of.

Australian-born singer Billy Williams protested Santa Claus' cruel injustices in 1913 with "Why Don't Santa Claus Bring Something to Me?"

A few years after his big hit "The Wreck of the Old 97," classically-trained Texas musician Vernon Dalhart recorded this obscure little Christmas tune in  1928.